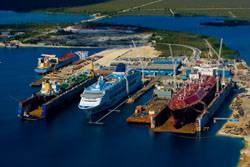 Carl-Gustaf (Calle) Rotkirch, a 32-year maritime industry veteran, has been named Chairman and Chief Executive Officer of the Grand Bahama Shipyard, Ltd., effective August 1, 2008.
In this capacity, Rotkirch will oversee all operations of the shipyard, which is one of the largest cruise ship repair facilities in the world; Grand Bahama Shipyard services more than 100 cruise ships, cargo vessels, tankers, and naval vessels annually.   Managing Director David Dalgleish will continue his day to day operation of the yard while reporting directly to Rotkirch.
Prior to assuming his new position at Grand Bahama Shipyard, Rotkirch spent the past three years at ’s Aker Yards BA Cruise and Ferries where he served in a number of executive positions, including vice president of sales.  He previously was with Kvaerner Masa Yards in for 16 years in various shipbuilding capacities, including Project Manager for the Atlantica/Spirit cruise ship series.  His maritime industry experience also includes 13 years at Wartsila Helsinki Shipyard and Managing Director of Porsgrunn VVS A/S in .  A native of , Rotkirch holds a master’s in naval architecture from the Helsinki University of Technology.