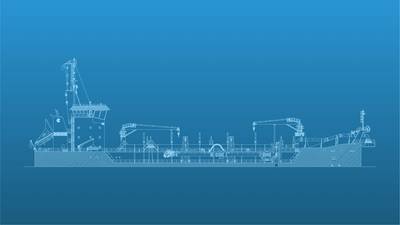 Royal IHC has been awarded the contract for the design and engineering of a 6,500yd3 trailing suction hopper dredge (TSHD) for U.S. based Cashman Dredging & Marine Contracting Co., LLC.

The tailor-made shallow draft TSHD design combines advanced technology with a high level of maneuverability, the designer said. The diesel electric configuaration of the dredge will enable optimal power utilization for the various types of dredging works, and the engines will comply with air pollution regulations EPA Tier IV and IMO Tier III. The design incorporates state-of-the-art dredge automation and high-efficient dredge equipment, increasing the efficiency of the dredging process.

Once the vessel is completed, it will help position Cashman Dredging for the most challenging dredging projects in the United States. Thanks to a thorough selection of equipment and specific design choices, the vessel will be truly versatile and can be deployed in various maintenance and beach nourishment projects.

The design includes two dredge pumps that enable large discharge distances when operated in series. Furthermore, it features two suction tubes enabling operation in most conditions by either using both tubes or just one in a strong current scenario.

The order has been realized by cooperation between Cashman Dredging, IHC America (Houston, Texas) and Royal IHC’s engineering department in The Netherlands.