Gabrielle Tétrault-Farber and Maxim Rodionov May 25, 2021 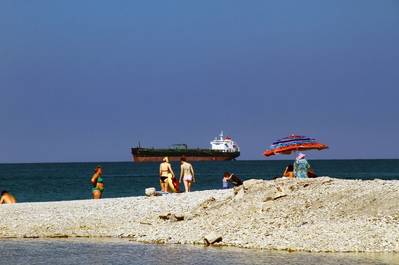 Russian authorities in the southern region of Krasnodar said on Tuesday they were investigating an oil spill in the Black Sea and working to clean it up.

Local authorities in the region, a popular tourist destination for Russians in summer, said the spill was located at around 800 meters from the shore near a deep-water sewer outlet in Tuapse, a coastal town north of the resort city of Sochi, the Interfax news agency reported.

They did not provide any detail on the size of the spill but said the oil was being absorbed by sorbents, or materials to absorb liquids.

The RIA news agency quoted Tuapse's administration as saying the oil products had flowed out of the sewer outlet.

Around 400 square meters of water in the Black Sea near Tuapse were covered in an oily film after the spill, a source told Interfax.

Some residents in the area complained to local media outlets about an acrid chemical smell and posted video footage on social media showing small waves of dark seawater at the shore.