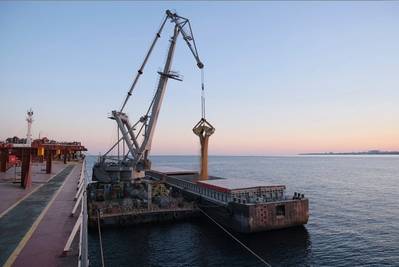 The United Nations, Turkey, and Ukraine are pressing ahead to implement a Black Sea grain deal with a transit plan in place for 16 ships on Monday, despite Russia suspending its participation in the pact that has allowed the export of Ukrainian agricultural products to world markets.

Russia, which invaded Ukraine on Feb. 24, halted its role in the Black Sea deal on Saturday for an "indefinite term" because it said it could not "guarantee safety of civilian ships" travelling under the pact after an attack on its Black Sea fleet.

The United Nations and Turkey, two main brokers of the July deal, scrambled on Sunday to save it. U.N. Secretary-General Antonio Guterres was deeply concerned about Russia's move and delayed a foreign trip to try and revive the agreement that was intended to ease a global food crisis, his spokesperson said.

Following Russia's move, wheat prices on international commodities markets were expected to leap on Monday as both Russia and Ukraine are among the world's largest wheat exporters, analysts said.

More than 9.5 million tonnes of corn, wheat, sunflower products, barley, rapeseed, and soy have been exported since July.

Under the deal, a Joint Coordination Centre (JCC) - made up of U.N., Turkish, Russian and Ukrainian officials - agrees on the movement of ships and inspects the vessels.

No ships moved through the established maritime humanitarian corridor on Sunday. But the United Nations said in a statement that it had agreed with Ukraine and Turkey on a movement plan for 16 vessels on Monday - 12 outbound and 4 inbound.

It said the Russian officials at the JCC had been told about the plan, along with the intention to inspect 40 outbound vessels on Monday, and noted that "all participants coordinate with their respective military and other relevant authorities to ensure the safe passage of commercial vessels" under the deal.

Turkish Defence Minister Hulusi Akar was in contact with his Russian and Ukrainian counterparts to try and salvage the agreement and had asked the parties to avoid any provocation, the Turkish defence ministry said.

On Sunday, Russia's ambassador to Washington, snapped back, saying the U.S. response was "outrageous" and made false assertions about Moscow's move.

The Russian defense ministry said Ukraine attacked the Black Sea Fleet near Sevastopol with 16 drones early and that British navy "specialists" had helped coordinate what it called a terrorist attack.

Britain denied the claim. Russia said it repelled the attack but that the ships targeted were involved in ensuring the grain corridor out of Ukraine's Black Sea ports.

Ukraine has neither confirmed nor denied it was behind the attack. The Ukrainian military suggested that Russians themselves may have been responsible for the explosions.

Ukrainian Foreign Minister Dmytro Kuleba said Moscow used the explosions 220 km (137 miles) away from the grain corridor as a "false pretext" for a long-intended move.

President Volodymyr Zelenskiy's chief of staff accused Russia on Saturday of inventing attacks on its own facilities.

Ukraine often accuses Russia of using the Black Sea Fleet to fire cruise missiles at Ukrainian civilian targets, a charge supported by some military analysts who say that makes the fleet a legitimate military target.

Russia's invasion has recently been dominated by a Ukrainian counteroffensive and Russian drone and missile attacks that have destroyed more than 30% of Ukraine's generating capacity and hit populated areas. Each side has accused the other of being prepared to detonate radioactive bombs.

The grain deal had restarted shipments from Ukraine, allowing sales on world markets, targeting the pre-war level of 5 million metric tonnes exported from Ukraine each month.

But ahead of its Nov. 19 expiry, Russia had said that there were serious problems with it and Ukraine complained that Moscow had blocked almost 200 ships from picking up grain cargoes.

The deal ensured safe passage in and out of Odesa and two other Ukrainian ports.

Ukrainian President Volodymyr Zelenskiy accused Russia of wanting to escalate the crisis, saying 218 ships were blocked and waiting to either carry food or enter Ukrainian ports.

Zelenskiy said 40,000 tonnes of wheat had been loaded onto a ship at the port of Chornomorsk, chartered by the U.N. Food Program and intended for Ethiopia which he said was "on the brink of starvation" and, like Yemen and Somalia, facing "catastrophic" food shortages.

"We are ready to release this ship into the sea," he said, but like other ships with agricultural products, it was being forced to wait, "because Russia is blackmailing the world with hunger," he said.

Zelenskiy called for a strong response from the United Nations and Group of 20 (G20) major economies to what he called Russia's nonsensical move on the grain deal, saying in a video address on Saturday that the move threatened large-scale famine in Africa and Asia.