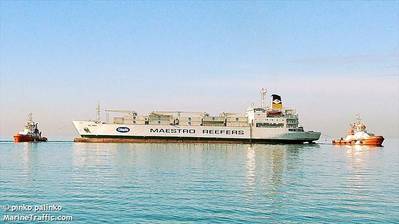 The Ice Rose, which was sailing from St. Petersburg in Russia to Gothenburg in Sweden, collided with a Russian frigate early on Wednesday morning, a spokesman for the Joint Operation Centre said.

He said the reason for the collision was not clear, but that the Russian vessel had permission to be in Danish waters and had notified Danish authorities of its presence.

No one aboard the Ice Rose was injured and there were no signs of oil leaks or ingress of water, the spokesman said.

In a statement carried by Russian news agencies, Russia's Baltic fleet confirmed the collision and said the Russian vessel, a small anti-submarine ship named Kazanets, was now returning to the port of Baltyisk in the Kaliningrad region.

It said visibility had been poor. Most of Denmark was covered in fog on Wednesday morning.

Cyprus-based Maestro Shipmanagement, which manages the Ice Rose, confirmed to Reuters that an incident had occurred, but could not comment any further and said it was awaiting further information from Danish authorities.

The owner of the ship, Switzerland-based Maestro Shipping, declined to comment.

(Reporting by Nikolaj Skydsgaard and Jacob Gronholt-Pedersen in Copenhagen; additional reporting by Gabrielle Tétrault-Farber in Moscow. Editing by Catherine Evans)