Russian Fleet at Heart of Ukraine Crisis is Central to Putin 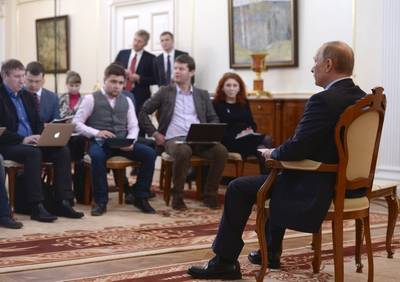 Gently bobbing up and down in the sheltered waters of the Bay of Sevastopol in Crimea, Russia's storied Black Sea Fleet has an air of decay about it.

Paint peels from low-slung dockside buildings, a solitary submarine sits dolefully alongside a pontoon, and the fleet's boxy grey ships date back to the Soviet-era with many soon destined for the scrap heap.

But appearances can be deceptive. The fleet, its base, and the sprawling military infrastructure that go with it, are vital to Russian President Vladimir Putin's military and geopolitical ambitions and one of the main reasons the Kremlin is now eyeing complete control of Crimea.

Nor will the fleet be outdated for much longer. It is soon to be restocked with billions of dollars worth of hardware. Lee Willett, editor of Jane's Navy International, said six new submarines and six new frigates were scheduled for delivery in the next few years.

It is also expected to take delivery of other vessels such as the giant Mistral helicopter carrier, currently being built in France, as well as new attack aircraft.

For Russia, the fleet and its Sevastopol base are a guarantor of its southern borders and a platform for projecting power into the Black Sea and from there into the Mediterranean. Its base is also a docking point for Russian oil tankers bound for the Bosporus and the fleet will be tasked with protecting Russia's South Stream gas pipeline once it is finished.

Russian analysts say Putin's decision to intervene in Ukraine was in large part driven by his desire to safeguard the Sevastopol base as he feared the country's new government would cancel a lease deal allowing the fleet to stay until 2042.

"Putin had every reason to think that would happen," said Fyodor Lukyanov, editor of the Moscow-based Russia in Global Affairs journal. "The new government in Ukraine wants to move closer to the European Union and NATO. Their agenda would have meant the fleet would have to leave."

Emotional Significance
Such a withdrawal, from a base that carries huge emotional and symbolic significance for Russians because of Sevastopol's role in the Crimean War and World War Two, would have been a serious geopolitical defeat for Putin, said Lukyanov.

It would also have left Moscow without a viable Black Sea naval base.

First purloined by Russia at the end of the eighteenth century by Empress Catherine the Great, Sevastopol's deep water port, sheltered bay, and the fact that it never freezes over, make it the best natural harbour in the Black Sea.

Russia's only alternative, its port at Novorossiysk, is buffeted by winds, is sometimes forced to shut because of bad weather, and would need billions of dollars of investment to house the Black Sea Fleet.

If Crimea, as seems likely, opts to become part of Russia in the face of opposition from the West and from the Ukrainian government, the Black Sea Fleet and its around 16,000 servicemen will become even more important.

Experts say the fleet currently has around 40 frontline warships including a submarine, two cruisers, a destroyer, eight frigates, 11 corvettes and attack craft, nine mine warfare vessels and eight amphibious ships which can be used to insert troops anywhere in the region. It also has a naval aviation arm.

Better Days
All agree the fleet has seen better days.

"Putin has used the fleet regularly in the Mediterranean to show that Russia is still a world power," said Willett of Jane's Navy International. "But it's always the same two or three ships, such as the fleet's flagship Moskva, or the destroyer Smetlivy. That suggests that only a small number of the fleet's assets are in service."

Operational or not, its commanders actively deploy what they have.

Some of its ships took part in the Russia-Georgia war in 2008, others have been used to deliver equipment to Moscow's ally, Syrian President Bashar al-Assad, and some have been involved in anti-piracy operations off the coast of Somalia.

The fleet has played an important role in the Ukrainian crisis so far, blockading Ukrainian navy vessels in the port of Sevastopol so that they can't set sail, and scuttling a ship to block the entrance to a Ukrainian naval base further along the Black Sea coast.

Ukrainian military officials also believe the fleet helped bring in extra Russian troops from Sochi after they finished providing security for the winter Olympics there.

One of four fleets operated by Russia, the Black Sea Fleet dwarfs the Ukrainian navy in size and firepower since it inherited around four fifths of the Soviet navy's ships in the region when the USSR collapsed in 1991, with the Ukrainians getting the rest.

Bridgehead
The fleet and its base have given Moscow an important bridgehead in Ukraine since the Soviet collapse with officers from Russia's FSB security service actively working there.

Former pro-Western Ukrainian president Viktor Yushchenko wanted the fleet to leave Sevastopol because he said it was an agent of instability.

Ukrainian critics say Russia has for years used the fleet to wage a propaganda and intelligence war to promote separatist sentiment in Crimea and to counter what it sees as hostile Ukrainian meddling.

The fleet has used its own newspaper, Flag of the Motherland, and its own TV production studio which makes programmes for local channels, to wage that war, they say.

But local residents in Sevastopol, many of whom are related to current or past Russian servicemen, say they cannot imagine the fleet anywhere else.

"Sevastopol without the fleet would just be a bit of land. The fleet is Sevastopol. Where would the fleet go if not Sevastopol?"

Under an agreement with Ukraine, Russia cannot base more than 25,000 men in Sevastopol and must negotiate with the Ukrainians if it wants to add new ships.

The advent of a Kremlin-controlled Crimea would allow Russia to expand and modernise the fleet as it wished.

"The Ukrainians were dragging their feet in talks about modernising the fleet," said Pavel Felgenhauer, a Moscow-based defence expert. "But if Russia gobbles up Crimea it can do what it wants".

A spokesman for the fleet said he was unable to comment "on anything" at the moment, while officers approached in Sevastopol declined to discuss the fleet's work.

Vladimir Anatolyevich, a retired captain 3rd class who served on the Soviet Union's nuclear submarines and who declined to give his surname, said the fleet would be safer if Crimea became part of Russia.

"Almost everyone in Crimea wants to become part of the Russian Federation," he said. "I just hope Russia doesn't now betray us and reject us."

Charleston, S.C. repair yard Detyens Shipyards has been awarded a $24,235,291 firm-fixed-price contract for a 120-calendar…