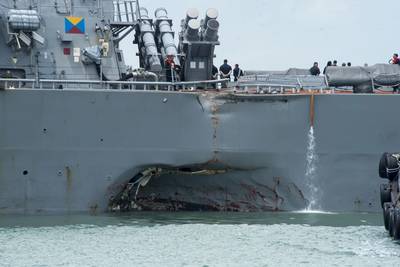 Damage to the portside is visible as the USS John S. McCain steers toward Changi Naval Base, Singapore, following a collision with the merchant vessel Alnic MC while underway east of the Straits of Malacca and Singapore. Significant damage to the hull resulted in flooding to nearby compartments, including crew berthing, machinery and communications rooms. (U.S. Navy photo by Joshua Fulton)