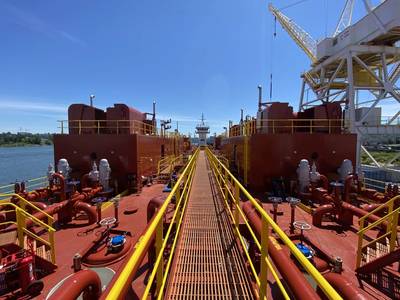 Seattle-headquartered Saltchuk Holdings informed the U.S. Securities and Exchange Commission (SEC) that it has proposed to buy the Overseas Shipholding Group (OSG) shares it doesn't already own for $3 each, lifting shares of the Tampa, Fla.-based marine transportation company on Friday.

"We believe Saltchuk would be an ideal long-term home for the company," Saltchuk said in the statement.

"By its nature, shipping has multidecade investment cycles and shorter-term economic cycles, both of which are better supported by a privately held family business versus being traded in the public markets," Saltchuk said.

"We believe culturally that OSG is a great fit with Saltchuk, that our values are aligned, and that our reputation can assure you, as the board, that we will support and welcome OSG’s 715 employees into the Saltchuk organization."

"We, along with our team of advisors, have followed [OSG] closely and are familiar with its operations, assets, and, more generally, with Jones Act shipping. We are keenly aware of the challenges of the current operating environment facing OSG. A transition to private ownership at this time with a right-sized capital structure will maximize value for current stockholders and better position the company and its employees for future success," Saltchuk said.

Saltchuk, which already owns a number of marine transportation and services companies such as TOTE, Tropical Shipping, Foss Maritime, Young Brothers and others, said it would fund the deal through a combination of equity capital from Saltchuk, minority capital provided by third parties and a refinancing of the company’s debt obligations.

OSG said its board of directors is evaluating the non-binding indication of interest alongside a range of alternatives, including a sale of all or part of the company, a merger or other business combination with another party, or remaining a public company and continuing to execute on management’s long-term business plan. It has not set a timeline for the decision process.

As a marine engineer focused on vessel design, I’ve watched the narrative on battery-electric and battery-hybrid vessels evolve from skepticism…

Shipping company Teekay LNG has rebranded as Seapeak following the completion of its acquisition by U.S.-based investment…