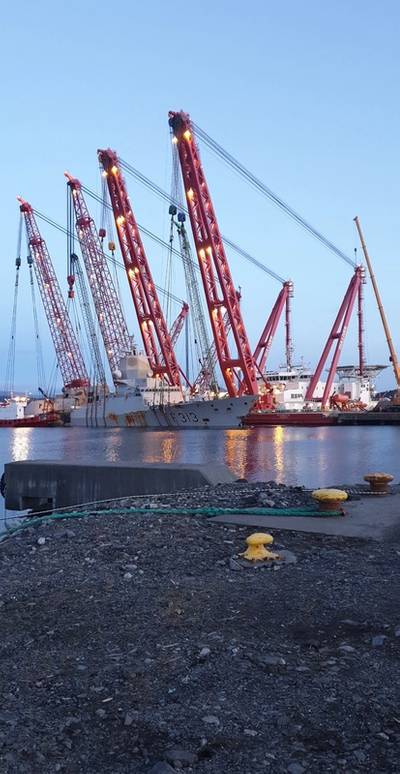 In cooperation with the salvage company BOA and the Norwegian Navy and Material Command, Semco Maritime participates in the current salvage operations of the frigate KNM Helge Ingstad.

The frigate has partly been raised and the job is now to prepare and complete the next phase, which involves lifting and securing the frigate onto a special barge for her transport to Haakonsvern naval base.

The frigate has arrived at Semco Maritime's yard facilities at Hanøytangen, which are perfect for this part of the operation. The yard is sheltered and its facilities are suitable for large floating cranes due to the good water depth right into the quay. In addition to that the area is large and can accommodate the necessary equipment and crew, as well as the closures necessary for an operation of this nature. A protection zone has been established from the sea and the zone is monitored from a boat, which is crewed on a 24/7 basis.

The area where the frigate is located, and where the preparation work for the ship’s next transport, is a military zone, and while the work is on more than 100 people from the defense, the salvage company and Semco Maritime will be staying at the camp at Hanøytangen.