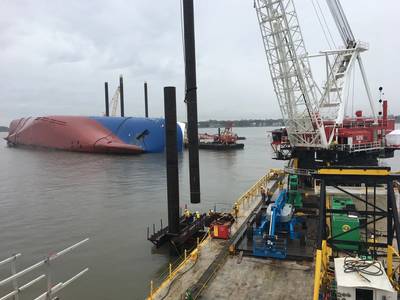 A Weeks Marine crane prepares to drive a pile using a vibratory hammer on February 26, 2020, near St. Simons Island, Ga., as part of the construction of the environmental protection barrier (EPB) around the motor vessel Golden Ray. (Photo by Tyler Drapeau)

Salvors are continuing work to remove the wreck of a South Korean car carrier vessel that ran aground and overturned near Brunswick, Ga. in September 2019.

Last week, unified command contractors started driving the first of 70-80 piles that will be used to hold an environmental protection barrier (EPB) in place around the MV Golden Ray wreck in St. Simons Sound, the unified command response team said in a statement.

The pile-driving work is being performed by Weeks Marine during daylight hours only and is expected to last about a month, said the unified command for the St. Simons Sound Incident Response.

The EPB will include a large floating containment barrier to help control surface pollutants, as well as large netting to contain subsurface debris.

After the EPB is constructed and in place, the team will begin demolishing large sections of the vessel, U.S. Coast Guard Commander Matt Baer told MarineLink recently.

Baer said the sheer size of the 656-foot, 20,000-deadweight-ton vessel and strong currents in the area present a number of challenges for workers involved in the complex wreck removal project.

The Golden Ray will need to be dismantled in place and removed in pieces because the vessel, in its current position and condition, would not be able to support the stress exerted on the hull and keel during parbuckling operations. The plan to dismantle the ship and remove an estimated 4,200 vehicles from on board was announced in February. T&T Salvage will conduct wreck removal operations.

"Removing a wreck that large from U.S. waters is really unprecedented. A lot of salvage has been done along our coastlines, but nothing to that degree." Baer said.

Baer said outgoing tidal currents in the area – among the strongest on the eastern seaboard south of the Bay of Fundy – have caused scouring along the vessel, basically removing the sand underneath and placing it on the other side of the wreck. "That's causing some hull tension," he said. "Fortunately, we haven't had any major issues with that so far."

Rocks placed next to the vessel have helped to reduce further erosion and stress on the hull. The removal of approximately 130 tons of weight, including the ship's rudder and propeller, has also helped to reduce stresses to the hull. 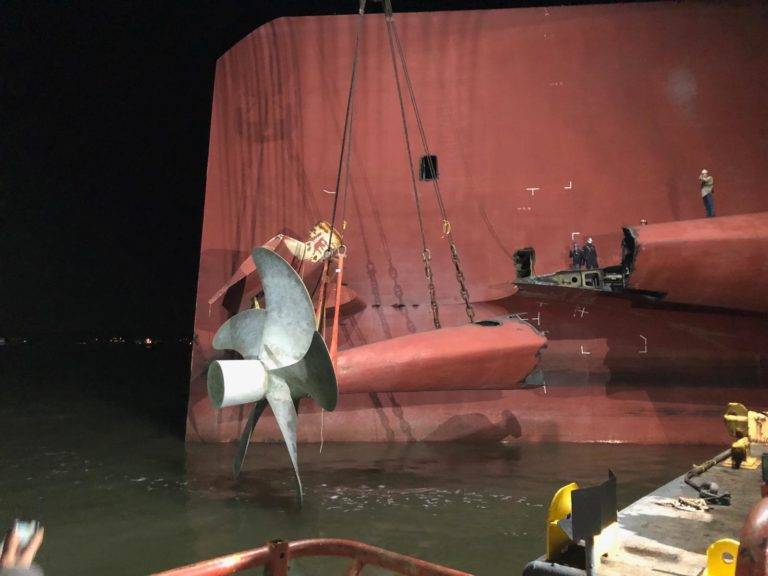 Baer said the unified command team has been closely monitoring the structural integrity of the hull via regular bathymetric and hydrographic surveying, as well as as diver inspections on a daily basis when weather allows.

The Marshall Islands flagged Golden Ray has been aground on its side outside the nation's second largest car carrier port since it capsized shortly after leaving the Port of Brunswick en route to Baltimore on September 8. The cause of the incident is under investigation.

In December, the unified command response team completed operations to remove more than 320,000 gallons of oil mixed with water from tanks inside the capsized vessel. 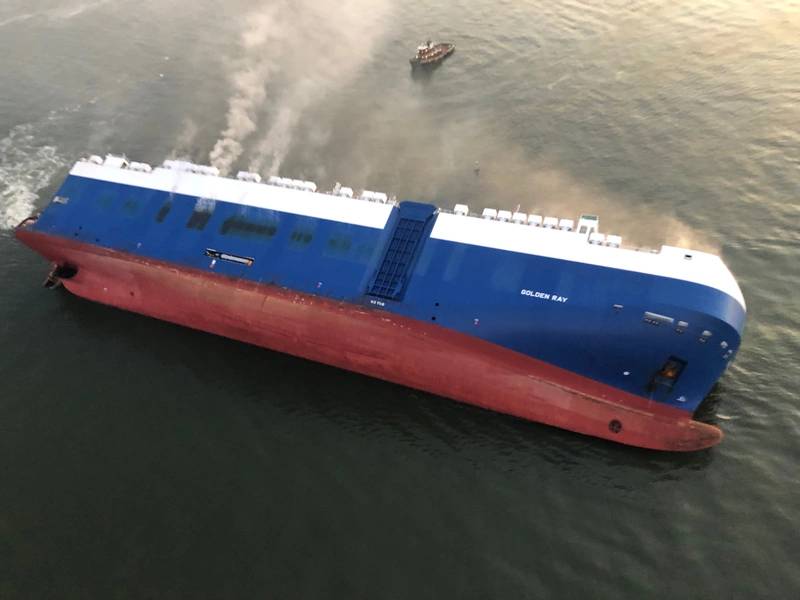 The 656-foot roll-on, roll-off cargo vessel Golden Ray disabled, listing and with a fire on board near St. Simons Sound, near Brunswick, Ga. All 24 people on board were rescued. (U.S. Coast Guard photo courtesy of Coast Guard Air Station Savannah)