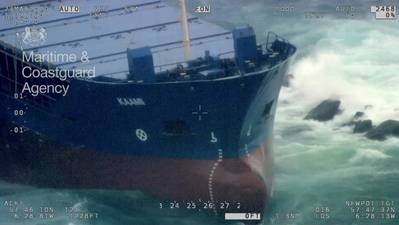 Salvage operations continue on board the cargo vessel MV Kaami after it ran aground in the Minches in March in northwest Scotland.

A HM Coastguard search and rescue helicopter winched all of the eight-person crew to safety from the cargo vessel which ran aground in adverse weather conditions in the early hours on March 23.

The vessel, which made contact with the Coastguard and reported taking on water, remains on hard ground at Sgeir Graidach rock and is being monitored by the U.K.'s Maritime & Coastguard Agency.

Salvage efforts are being overseen by the Secretary of State’s Representative for Maritime Salvage and Intervention supported by the Maritime and Coastguard Agency, salvors, the ship’s insurers and the Scottish Environment Group.

Salvage company Resolve is removing pollutants from the vessel as it prepares for the removal of cargo. Salvors and specialist divers are carrying out onboard and underwater surveys to assist with the intended refloating and eventual removal of the vessel.

So far, specialist teams have removed most of the remaining fuel and contaminated seawater from onboard fuel tanks for recycling and disposal ashore. The fuel removal operation is nearing completion. In addition, salvors have removed most other pollutants and loose material, such as paints, ropes and buoys, as these might hamper future operations and had the potential to impact on the environment and wildlife. This material has also been sent for recycling and disposal ashore.

The MCA Counter Pollution Team and the HM Coastguard fixed wing aircraft are supporting operations with regular monitoring flights carried out to provide aerial footage and detect and assess any pollution. It is believed that around 28 cubic meters of diesel have escaped from the ship following the grounding. The Scottish Environment Group is aware and has assessed the impact of the pollution as low and nonpersistent.

Salvors are working to contract and prepare a suitable barge in the Western Isles to enable cargo-offload when weather and sea conditions allow for safe operations. Arrangements for dealing with the offloaded cargo are being developed in consultation with the waste regulator Scottish Environment Protection Agency (SEPA) and other partner organizations.

Divers were able to briefly enter the water on Tuesday but sea conditions precluded a full survey of the seabed area around the ship. This will continue when conditions allow.

It is assessed that current and forecast weather conditions will impose a delay to the ongoing work, but all efforts are being made to resolve the incident as quickly and safely as possible, the Maritime and Coastguard Agency said.

A temporary exclusion zone of 500 meters remains in place around MV Kaami to all but those vessels directly involved in supporting the response. The Maritime Accident Investigation Branch is carrying out an investigation remotely with assistance from the salvors.

Reverse Osmosis and the New Dawn of Marine Desalination

Today’s desalination plants are rugged, durable and highly automated to meet the demands of operators and the crew, enabling…

CMA CGM, the world’s fourth-largest container shipping group, said it has restored its online business services after a cyber…