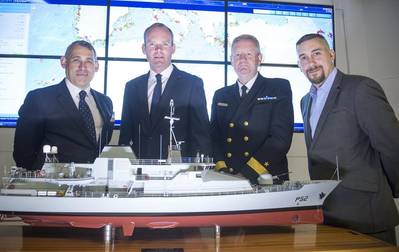 Voyager IP, the Irish marine telecoms solutions specialist, has partnered with the Irish National Space Center to win a €500,000 contract to manage the entire satellite communications service for the Irish Naval Fleet at home and abroad. Voyager IP will provide the satellite airtime, technical assistance for the onboard systems and a 24 hour helpdesk from its base in Wicklow, while the National Space Center will provide the satellite network infrastructure.
Simon Coveney TD, the Irish Minister for Defense, Agriculture, Food and the Marine, officially launched the new service. Minister Coveney said, "It’s great to see Irish companies like Voyager IP and the National Space Center and competing for and winning a contract like this. I wish them well for the future. Both companies will play an important role in supporting the Irish Naval Service with their current humanitarian mission in the Mediterranean.”
Voyager IP specializes in maritime satellite communications solutions and support for white yachts, cruise ships, commercial vessels and offshore platforms globally. It also offers broadband bonding technology.
Mark Elliott, managing director of Voyager IP, said, “Marine internet speed is always a challenge and if you’re tired of switching between internet sources when one drops or goes into blockage, then Broadband Bonding from Voyager IP allows you to combine the various internet channels into one single channel. Whether you’re streaming, emailing, or downloading you can seamlessly bond your Yachtspot, 3G/4G/LTE and shoreside connections in virtually any combination into one single high performance channel.”