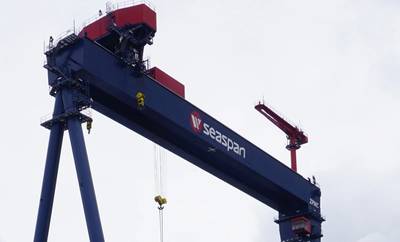 Canadian shipbuilder Seaspan Shipyards together with the Government of Canada announced that work will begin soon on the Joint Support Ships (JSS) for the Royal Canadian Navy (RCN).

These purpose-built vessels are being constructed as part of a strategic partnership between the Government of Canada and Seaspan under Canada’s National Shipbuilding Strategy (NSS). The vessels will meet the nation’s domestic and international obligations and will fully meet the operational needs of the RCN.

“Seaspan Shipyards is a proud partner to the Government of Canada under the National Shipbuilding Strategy,” said Brian Carter, President & CEO of Seaspan Shipyards. “By starting construction on the Joint Support Ships, our company is supporting the operational needs of the Royal Canadian Navy and the long-term success of Canada’s shipbuilding industry.”

The ships will deliver fuel and other vital supplies to vessels at sea, offer medical and dental services, and provide facilities for helicopter and equipment repair. According to the shipbuilder, the JSS will be built to highest standard and with modern equipment, propulsion redundancy, a 30+ year life expectancy and the ability to stand in harm’s way if required. The JSS possess the ability to support Canadian Naval Task Groups and operations with Canada’s allies for both military and humanitarian missions and will be fully staffed by the RCN.

“The National Shipbuilding Strategy is helping to build a strong and sustainable shipbuilding industry in Canada, while creating jobs and generating major economic benefits from coast to coast to coast.” said the Honourable Carla Qualtrough, PC, MP, Minister of Public Services and Procurement Canada. “With the construction of the JSS, our government is delivering on our commitment to support the men and women of the Royal Canadian Navy as they undertake humanitarian and military missions on behalf of our great country.”

Canada’s shipbuilding industry has been rebuilt thanks to the NSS. To date, Seaspan has $600 million in committed contracts and engaged approximately 500 Canadian firms thanks to its NSS-related work alone. At its peak, work on JSS will contribute towards sustaining an estimated 1,000 jobs at Seaspan.

The JSS will be designated the Protecteur-class in recognition of the distinguished service provided by Canada’s former replenishment oilers – Her Majesty’s Canadian Ships (HMCS) Protecteur and Preserver.