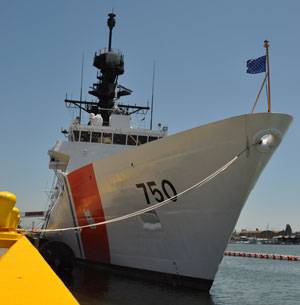 The U.S. Coast Guard took final acceptance of the Coast Guard Cutter Bertholf, the first of the Legend class National Security Cutter fleet, at the cutter's homeport of Alameda, Calif., Friday, May 8.

"Final acceptance of Bertholf marks a new chapter for the National Security Cutter project and a new era for the Coast Guard," said Rear Adm. Gary T. Blore, assistant commandant for Acquisition. "Today, the first NSC transitioned to operations and sustainment, a major milestone on its path to becoming a fully capable, multi-mission surface asset in the Coast Guard's inventory."

Bertholf will continue following the scheduled post-delivery plan as it enters full Coast Guard operation, including mission systems and weapons testing; follow-on manpower and training analysis; and installation of increased communications and sensor capabilities new to the Coast Guard.

The Coast Guard's decision to accept Bertholf complies with the Department of Homeland Security's acquisition authority and is reinforced by the recommendations of a Coast Guard executive board that includes senior leaders of the acquisition directorate, the capability directorate and the technical authorities, which includes the directorates of engineering and logistics, command and control and human resources.

The 418 ft Coast Guard Cutter Bertholf leads the eight-ship Legend class.  Designed to be the flagships of the U.S. Coast Guard's modern fleet, the National Security Cutters are capable of executing the most challenging Coast Guard missions.  Bertholf was christened on Veterans Day, 2006, and is named after Commodore Ellsworth P. Bertholf, the first commandant of today's Coast Guard.  Bertholf's sister ships, the Waesche and the Stratton, are under construction in Pascagoula, Miss.  Long lead time materials for the fourth National Security Cutter, the Hamilton, have been ordered.