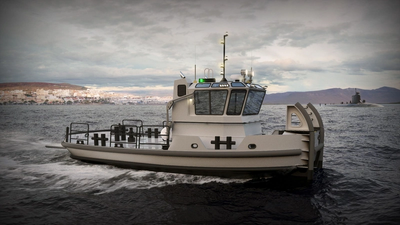 Jensen Maritime Consultants, a Crowley company, said one of its workboat designs will be used by a Pacific Northwest boat builder to fulfill a construction project for the Naval Sea Systems Command (NAVSEA).

In support of the project, Jensen will supply a functional and regulatory design package for the 41-foot vessel, which will provide ship- and sub-assist services, as well as other port operational services at U.S. Navy port locations around the world.

Jensen’s Bryan Nichols, director, business development, said, “We have worked closely with the build team to ensure maximum efficiency for vessel construction. Once completed, it will be a well-equipped, very maneuverable workhorse.”

Delivery is expected in fall of 2018.

The U.S. Navy will use the 22,000-pound bollard-pull workboat in locations around the world to primarily assist barges, submarines, and other naval vessels; open and close security barriers; and tow or push floating port operations support equipment. To support these missions, Jensen designed the vessel to include two Pullmaster hydraulic deck winches for use in multiple mooring configurations and heavy-duty fendering to offer optimal protection when performing such work. The push knees are also radiused toward the top for use when pushing against vessels with flare.

Unique to the workboat, which has a beam of 16 feet, 7 inches, is a removable cabin and push knees, which allow it to be transported over-the-road by truck. The propulsion system consists of ZF W325 marine gears and inboard diesel engines, Twin Cummins QSM11-455, which offer 450 BHP at 2,100 RPM.

Additionally, Jensen said it added highly functional features to the design, such as an H-bitt on the bow, mooring bitts at the shoulders and stern quarters, and an aft taffrail for a smooth sweep of the tow hawser while towing astern. The workboat also has a 500-pound capacity lifting davit that can be mounted in three different locations on the stern, kort nozzles and flanking rudders to improve steering when operating in reverse, and skegs for directional stability while underway and structural support to facilitate drydockings and transport.

The workboat offers a complete HVAC system and a 3,100-pound total payload, including up to five crewmembers, additional mission gear and cargo, and a six-person life raft. The boat has been designed to American Boat and Yacht Council (ABYC) standards and meets the U.S. Navy’s stability requirements, including damage stability.