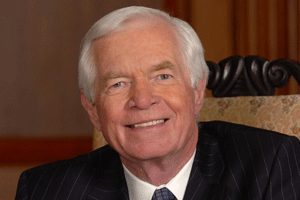 The American Shipbuilding Association (ASA) announced that U.S. Senator Thad Cochran (R-MS) would be the 2010 recipient of the Herbert H. Bateman Award. The award will be presented Wednesday, June 23 at 6:00 pm during ASA's Salute to the Illih Congress reception in the Gold Room (2168) of the Rayburn House Office Building.

"Thad Cochran, throughout his 38 years of service in the U.S. House of Representatives and in the U.S. Senate, has been a tireless advocate for a stronger shipbuilding industry and our Nation's sea services. He has consistently increased shipbuilding budgets to fund more naval ships to meet national security requirements. He has provided funding to recapitalize the aging fleet of Coast Guard cutters for homeland security and search and rescue missions, and to promote commercial shipbuilding in the United States. He is also a tremendous supporter of the Jones Act, which requires ships transporting cargo between U.S. ports to be American-built, -owned, and -crewed," said ASA President, Cynthia Brown.

The Herbert H. Bateman Award was established by the ASA in 2000. This award is the industry's highest recognition of an individual in the executive branch, legislative branch, or industry who has demonstrated years of consistent, outstanding, and inspirational leadership in fighting for a stronger shipbuilding industry. Congressman Herb Bateman of Virginia, the award's namesake, demonstrated these qualities throughout his tenure in the U.S. House of Representatives from 1981 -2000.