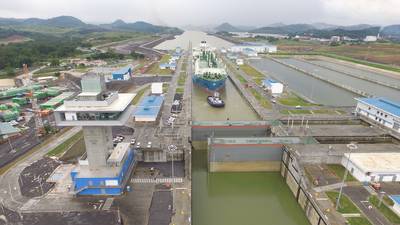 The first liquefied natural gas vessel from the lower 48 U.S. states is on its way to China, according to a Reuters interactive map on Friday, the latest sign that the expanded Panama Canal is allowing U.S. exports to reach the world's top LNG buyers in Asia.
Royal Dutch Shell's Maran Gas Apollonia loaded up with gas at Cheniere Energy Inc's Sabine Pass LNG export plant in Louisiana, the map showed. It passed through the canal earlier this week and was moving northwest up the west coast of Mexico on Friday afternoon.
Shell does not disclose the destination of its vessels, company spokesman Ray Fisher said.
LNG experts at energy data provider Genscape confirmed the ship's destination was China, but said that could change.
China's fast-growing demand for gas, to help alleviate high levels of pollution from burning coal, has outstripped its domestic supply since 2007, according to U.S. Energy Information Administration data.
The Panama Canal shaves distances between export plants dotted along the Gulf of Mexico and Asia to 9,000 miles (14,484 kilometres) from 16,000, allowing U.S. producers to better compete in one of the world's biggest gas consuming markets.
Since Sabine Pass started exporting gas in February, 20 ships have picked up about 65.9 bcf of gas from the facility, based on the capacity of the tankers.
So far, gas from Sabine has been delivered to South America, India, the Middle East and Europe.
The United States, which has been exporting LNG to Asia from Alaska since 1969, has not shipped gas directly to China at least since 1973, according to federal energy data going back that far.
The United States, however, did re-export some gas from at least one other country to China in 2011, according to the federal data.
A surge in U.S. gas production from the shale revolution stimulated billions of dollars of investment in building LNG export terminals, transforming the country from an importer of LNG to an exporter of the fuel.
By 2019, the United States is expected to be pumping out around 60 million tonnes of LNG annually.
So far only Sabine Pass is exporting LNG from the lower 48 states and output will double to 9 million tonnes per annum as Cheniere adds a second production line later this year.
(Reporting by Scott DiSavino; Editing by Richard Chang)