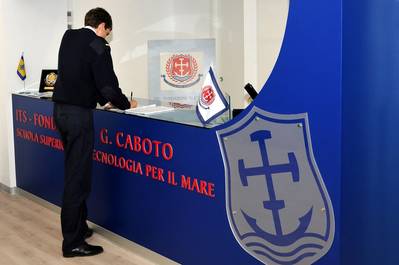 23 letters of employment delivered to new graduates in the presence of the Institutions of the School.
Eleven Italian shipping companies “christened” the courses at the I.T.S. Fondazione “G. Caboto” (Caboto Foundation), an Institute of Advanced Technology, addressed to 50 students who will be recruited and taken aboard their ships once having completed the two-year training period, during which they will already have the opportunity to sail the seas worldwide as part of their education.
At the same time 23 other students graduating today in “Advanced Technician for Mobility of People and Goods – Navigational Watch and Ship Machinery and Equipment” have received letters of employment from Amoretti Armatori Group, Finaval, Fratelli d’Amico, Gruppo d’Amico and Premuda for a forthcoming embark on their ships.
These are significant figures that reaffirm the need for the leaders in maritime economics to take advantage of specialised courses such as those offered by Technology Colleges, which are well-suited for preparing young people to enter the market with expert training and on-board experience.
“The training experience of the I.T.S. “Fondazione G. Caboto”, which yet again has achieved 100% employment of its graduates, is a concrete example of the effectiveness of skills partnerships,” added Silvia Costa, President of the Culture and Education Committee at the European Parliament. “To tackle early school leaving, we must invest in scholarships and work grants, paid internships and a balance between school and work. To reduce the number of NEETs, we must strengthen the ties between schools, professional training and businesses. In Europe we are investing resources and attention in order to improve and reinforce the orientation and job training system – starting from job centres – and the connection between schools, professional training and business, also taking a closer look at the role of apprenticeships. 59% of graduates from professional education and training programmes are employed immediately after receiving their qualification, and 50% three years after graduating. These figures confirm how closely tied education, training and work are.”
The I.T.S. Fondazione Caboto is a testament to this and according to the President Cesare d’Amico: “thanks to the increase in demand from shipping companies and the active support from the institutions, today we are able to offer an outstanding opportunity for future growth to 50 young people, as well as 23 jobs immediately after graduating. This valuable model has already established itself, but I.T.S. Caboto wants to grow further.”
For the new 2016 courses, thanks to the participation of eleven shipping companies (Calisa S.p.A., Carboflotta, Finbeta S.p.A., Italia Marittima, LNG Shipping and RBD Armatori, who also delivered letters of employment) the programme has increased the number of available places from 30 to 50. 300 candidates enlisted in the application procedure, not only from the Lazio region, but also from all Italian regions, eager to set off on a one-of-a-kind education programme.
During the two years of training, the students will have the chance to alternate between in-class training periods and first-hand on-board experiences: the approximately 1,500 hours of in-class lessons will be accompanied by 3 periods aboard a ship for a total of 12 months, the necessary amount of time to enable them to qualify as officers.
The School is not only well established in the maritime sector, but it also ranks among the top educational institutions able to satisfy the new requirements concerning the new school-work balance approach, introduced by the new Italian financial law passed by the government.
Between September and October I.T.S. Caboto plans to open another application procedure to satisfy the increased market demand.
The conferral ceremony of the certificates was held during the inauguration of the new premises of the Foundation in the Palace of Culture (Palazzo della Cultura) of Gaeta. The event saw the participation of several representatives from the political authorities and of the shipping industry, like for example Francesco Gargiulo, CEO of IMEC, and Ugo Salerno, President and CEO of RINA S.p.A.