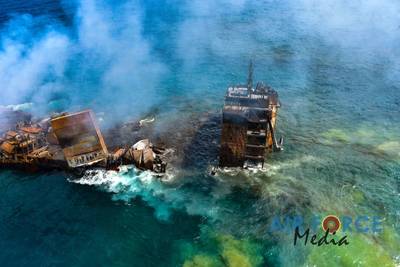 Singapore authorities said that they have started their own investigation into a stricken cargo ship carrying tonnes of chemicals that caught fire off Sri Lanka's west coast.

The Singapore-registered MV X-Press Pearl, carrying 1,486 containers, including 25 tonnes of nitric acid along with other chemicals and cosmetics, was anchored off Sri Lanka's west coast when a fire erupted onboard after an explosion on May 20.

Tonnes of plastic pellets have fouled the country's rich fishing waters in one of its worst-ever marine disasters.

Singapore's Marine and Port Authority said it understood that the ship's stern was now submerged, and the ship may be at risk of sinking.

Sri Lankan authorities were looking into the cause of the incident with the ship operator, the MPA said in a statement late on Wednesday.

"As the flag State, MPA has also commenced its own investigation on the incident," it added.