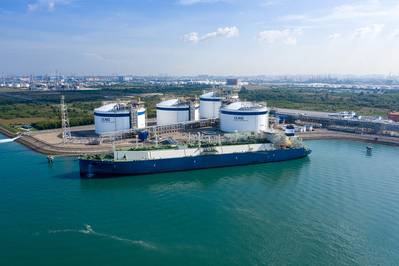 Singapore LNG Corp, operator of the city-state's liquefied natural gas (LNG) terminal, is designing a new facility to extract chemicals from the super-chilled fuel, in a project that could help boost the island's energy security.

The company said on Wednesday it is working with Keppel Infrastructure through its wholly-owned subsidiary Keppel Energy and another industry partner on front-end engineering and design (FEED) for a natural gas liquids extraction facility at the terminal in Jurong Island, located in western Singapore.

The facility will remove heavier hydrocarbons such as ethane or propane from LNG, liquefy them using cold energy from the LNG and deliver the chemicals to plants on Jurong Island as feedstock for petrochemical products, SLNG and Keppel Infrastructure said in the joint statement.

If the project went ahead, it would give Singapore more flexibility in the type of LNG it can import, which would, in turn, improve the country's energy security, the companies said.

Singapore relies on "lean" gas, which mostly consists of methane, but with the new facility it would be able to import "rich" gas which has small amounts of other hydrocarbons such as ethane, propane, and butane.

"The NGL extraction project has the potential to increase the competitiveness and sustainability of our chemicals industry," said Ow Kai Onn, vice president and head of Chemicals & Materials at the Singapore Economic Development Board.

This is done "by unlocking natural gas-based feedstock – an important energy transition fuel and harnessing cold energy from the existing LNG regas terminal to reduce power consumption and carbon emissions respectively," he said.

The design work is expected to take 12 to 18 months, after which the partners will decide whether to go ahead with construction.