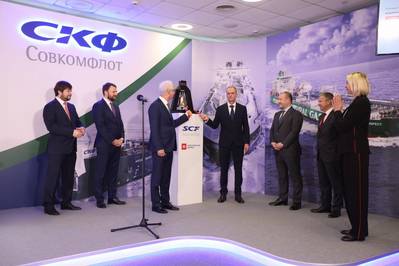 Sovcomflot's shares fell below their offer price in their market debut in Moscow on Wednesday after the initial public offering (IPO) of Russia's biggest shipping company was priced at the lower end of its range.

Sovcomflot's IPO, the first share offering by a Russian state company since 2013, will allow the government to reduce its stake to 82.8% following the sale of new shares worth about $550 million.

The deal was priced at 105 roubles ($1.34) per share, at the lower end of the initial guidance of between 105 roubles and 117 roubles per share, valuing Sovcomflot at about $3.2 billion.

The first big float by a Russian company in a couple of years coincides with an increase in negative investor sentiment towards Moscow after the poisoning of Kremlin critic Alexei Navalny and protests in Belarus.

"This is a traditional market reaction when the deal comes at the lower end of the guidance," a Russian fund manager said. "(I) Believe that the price will stabilise by the day-end."

Russia's sovereign wealth fund, RDIF, said on Wednesday that it, along with leading wealth funds from the Middle East and Asia, were anchor investors in Sovcomflot's offering.

RDIF did not provide more details.

Demand was nearly equally split between Russian and foreign investors, including from Britain, and retail buyers asked for around 15% of the shares, said Boris Kvasov, co-head of equity capital markets at VTB Capital and one of the bankers on the deal.

Sovcomflot is central to Moscow's plans to reduce its dependence on western export routes. The company has 146 ships in its fleet, including ice-class tankers and is focusing on shipping oil and liquefied natural gas from Russia's Arctic both to Europe and Asia.

Sovcomflot plans to use the proceeds for investments in new assets, decarbonization and deleveraging.

VTB Capital, Citi, Sberbank, JP Morgan and Bank of America were acting as global bookrunners and coordinators of the deal.

JERA, the world's biggest liquefied natural gas(LNG) buyer, said on Wednesday that it has begun LNG bunkering business in central Japan through its jo