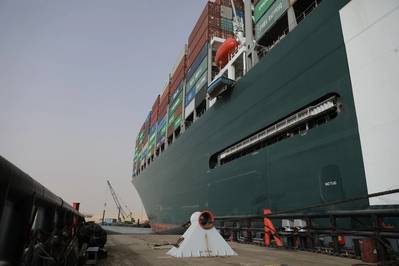 Salvage teams from the Netherlands and Japan have been hired to devise a plan to refloat a giant container ship blocking the Suez Canal, the company leasing the vessel said on Thursday.

Taiwan’s Evergreen Marine Corp said Dutch firm Smit Salvage and Japan’s Nippon Salvage had been appointed by the ship’s owner and would work alongside its captain and the Suez Canal Authority on a plan to refloat it.

“Evergreen Line will continue to coordinate with the shipowner and Suez Canal Authority to deal with the situation with the utmost urgency, ensuring the resumption of the voyage as soon as possible and to mitigate the effects of the incident,” Evergreen said in a statement.

“As the vessel is chartered, the responsibility for the expense incurred in the recovery operation; third party liability and the cost of repair (if any) is the owner’s.”

The Ever Given container ship, owned by Japan’s Shoei Kisen, was grounded amid high winds in a southern section of the canal on Tuesday, forcing a suspension of shipping as tugs try to refloat it.