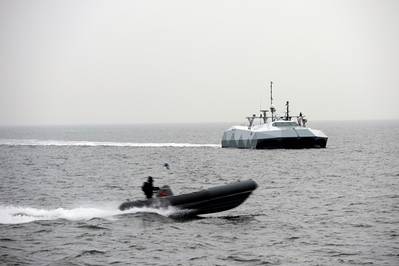 The program, designed to help accelerate the delivery of innovative maritime technologies across all of the armed services, provided NECC sailors an opportunity to observe new technologies developed by industry in a realistic maritime environment. The program also provided the 15 participating industry partners an opportunity to receive immediate end-user feedback toward increasing technology readiness levels.

"Warfighting needs are rapidly changing, and our interest is in looking at mature technologies and future capabilities that could be transitioned to fill an operational need sooner than later," said Dale Shiflett, NECC's deputy assistant chief of staff for strategy and technology. "Using the Stiletto Maritime Demonstration Program allowed us to look at the realm of possibilities for new and improved technologies. What better way to do that, than to have both the warfighter and the system developers in the same environment using the systems and having discussions on how it could work better."

The second capability demonstration will be held in April for the United Kingdom Defense Science and Technology Laboratory.