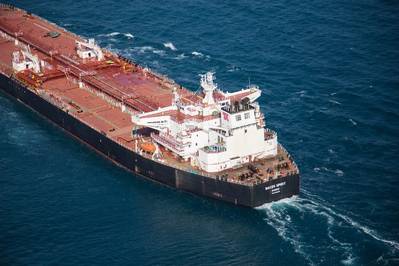 Average crude tanker spot rates moderately increased during the first quarter of 2019, as some of the positive drivers from late 2018 continued into early 2019, said Teekay Tankers.

"These included high seasonal oil demand, the impact of winter weather delays, and relatively high global oil production prior to the full implementation of OPEC supply cuts," it said.

However, spot tanker rates weakened as the quarter went on, and the market faces a number of near-term headwinds during the second quarter of 2019.

The largest operator of mid-sized tankers including suezmax, aframax, and long range two (LR2) vessels pointed out in a stock exchange annoucement that global crude oil production has fallen by approximately 2.5 million barrels per day (mb/d) since the start of the year, primarily due to a reduction in OPEC supply.

Lower OPEC production is a result of both high adherence to the 1.2 mb/d of cuts announced at the start of the year, and additional unplanned outages in Iran and Venezuela due to the impact of U.S. sanctions.

Tanker demand has also been dampened by heavier than normal refinery maintenance during the second quarter of 2019. This comes as refiners look to complete maintenance and upgrade programs early this year in anticipation of much stronger demand in the second half of the year, when they will need to operate at high throughput levels in order to produce sufficient distillates to meet the new IMO 2020 regulations.

Demand is also expected to be boosted by a significant increase in global refining capacity during the second half of the year, with the IEA forecasting a 4.6 mb/d increase in global refinery throughput between the seasonal low point in March 2019 and the anticipated seasonal peak in August 2019. This should generate significant demand for both crude and product tankers from the third quarter of the year.

Tanker demand should be further boosted by an increase in U.S. crude oil exports later in the year as new pipeline capacity comes online linking the Permian Basin to the U.S. Gulf Coast. It is expected that U.S. crude oil exports may reach 4 mb/d by the end of the year, increasing mid-size tanker demand for direct exports to Europe as well as Aframax lightering demand for exports to Asia on VLCCs.

In addition, Teekay Tankers expects that OPEC may start returning barrels to the market in the second half of the year in order to keep the market well supplied as demand rises. However, the political situations in Iran, Venezuela and Libya remain as wild cards.

Tanker fleet growth is expected to slow down considerably from the second half of 2019 as the orderbook rolls off.

The tanker orderbook currently stands at 59.4 mdwt compared to a total fleet of 600.7 mdwt, or 9.9 percent of the existing fleet. This is the lowest orderbook-to-fleet ratio since 1997 and paves the way for relatively low levels of fleet growth over the next two years.

Fleet growth could be further dampened in the coming months due to an expected increase in off-hire time as vessels are taken out of service to be fitted with scrubbers in advance of the IMO 2020 regulations.

Global oil firms are preparing to spend more than $53 billion in Guyana’s coveted Stabroek Block during the coming decade.According…