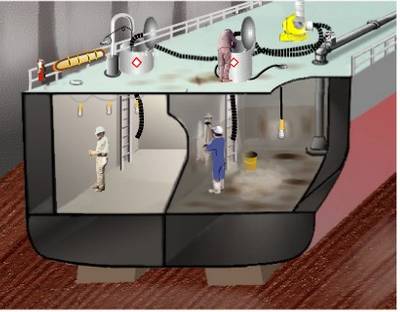 For as long as oil and petrochemicals have been in use by transportation, safely managing their highly flammable, toxic, and environmentally damaging vapors has been an ever present challenge. Even with increasing emphasis on safety procedures and better training, these invisible and dangerous vapors continue to result in the loss of life and property. But now, new nanotechnologies can provide safer and faster solutions that were not thought possible with conventional methods. NanoVapor’s patented nanotechnology systems are now becoming available for marine and other transportation modes, so they too can realize the dramatic improvements in workplace health and safety made possible with more effective suppression of these dangerous vapors in confined spaces.

In the marine transportation business, safety and time often work against each other as operators seek to improve overall efficiency by reducing the vessel downtime related to unscheduled and scheduled maintenance, repairs, and inspections. This time pressure can lead to inadvertent but deadly lapses in the checks and balances that are designed into safety procedures that deal with these hazardous vapors. NanoVapor addresses these risks not only by significantly reducing the time needed to achieve safe vapor levels, but by also maintaining these safe levels for up to a week or more.

Gas Freeing Confined Spaces
When gas freeing a fuel or product tank, NanoVapor’s technology can virtually stop vapor formation at its source by forming a molecular barrier on any surface where oil, fuel, and other petrochemicals are present. This molecular barrier is so thin that only a few ounces of its nano-engineered suppressant molecules are needed to fully suppress vapor concentration to safe levels in a 100 cubic meter tank. Because no measurable residue is left behind, the need for costly and time-consuming recovery operations is minimized or eliminated.

To show the degassing effectiveness of NanoVapor’s aviation degassing system, a live side-by-side degassing demonstration was performed on the wing fuel tanks of a Boeing 737 aircraft. Prior to degassing, the jet fuel in each of these fuel tanks was drained using normal procedures, leaving the usual puddles of fuel trapped by the numerous internal structures within the tank. The wing tank on one side was then degassed using NanoVapor, while the tank on the other side was simultaneously degassed using conventional air ventilation. The graph in Figure 1 shows the time it took NanoVapor to reduce the fuel vapors to the safe level of 100 ppm (13 minutes) as compared to normal air ventilation (more than 7 hours).

It is important to know that NanoVapor’s molecular vapor suppression continues long after the suppressant delivery system is removed. The graph in Figure 2 below shows that the vapor concentration stayed at safe levels after the delivery system was removed, while the concentration in the tank with air ventilation quickly increased above hazardous levels.

NanoVapor produces similar results at larger scales with time savings of 70% on a 30,000-bbl tank barge, even when constrained by a low-flow vapor recovery system. Savings can be further increased by optimizing for specific product type, tank size, geometry, venting configurations, and flow rates of the vapor recovery systems.

Because there are no reactive chemicals or inert gases involved with NanoVapor, breathable air is never displaced and normal oxygen levels are maintained throughout the confined tank space. This also results in a more environmentally friendly solution, as no additional hazardous waste is created in this gas freeing process.

Currently, NanoVapor’s vapor suppression systems are optimized for hydrocarbons categorized as C5 or higher, including HFO, LSFO, and other refined products. Its patented systems and nano-engineered suppressants have been designated as an international Best Practice Standard for degassing underground storage tanks by one of the largest oil companies in the world, and successfully adapted for use on large aircraft, barges, and above ground storage tanks. It is an APEA recognized gas freeing method, and NanoVapor’s ST1000 delivery system is portable, simple to use, and intrinsically safe (ATEX Zone 2).