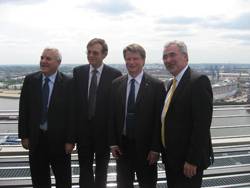 Last month MR’s Henrik Segercrantz traveled to Hamburg for an exclusive preview of the SMM 2010 exhibition.

The SMM international trade fair for shipbuilding, machinery and marine technology will take place in Hamburg, Germany, on 7-10 September. This year much focus will be on environment-friendly technologies and products. The supporting program for SMM 2010 will for the first time this year include the Global Maritime Environmental Congress (gmec), and the Offshore Dialogue, which will also look into maritime technologies for offshore mining and wind farms. The semi-annual mega-size event is now arranged for the 27th time by Hamburg Messe und Congress GmbH, owned by the City of Hamburg.
In 2008, SMM attracted 53,000 visitors from over the world. "We expect the same number this year," Peter Bergleiter, Project Director at Hamburg Messe, told Maritime Reporter. There will be some 2000 exhibitors from some 60 countries, exhibiting in the eleven permanent halls and some outside areas of the exhibition, in downtown Hamburg. "In 2008, we used for the first time the whole 90,000 sq.m. (967,000 sq.ft) trade fair area for SMM. The area cannot be extended further," Bergleiter said.
The number of national pavilions at SMM has increased to some 30. A joint US and Canada Pavillion will again this year be set up for some twenty-four companies and the U.S. Dept. of Commerce and in all at SMM, more than fifty companies plus a number of agent and distributor representatives for North American products.
Efthimios E. Mitropoulos, Secretary-General of the IMO is to be the main speaker at the opening of SMM 2010 and the gmec environmental congress on September 6th, with Germany's Chancellor Angela Merkel acing as patron. Gmec is to be held during the first two days of the trade fair. David Dingle, Chairman of the European Cruise Council and CEO of Carnival UK, is to open the congress, which will gather representatives from the shipping, shipbuilding and port sectors as well as from the IMO, European Commission and related authorities worldwide. The panels of the congress are to be headed, apart from Dingle, by Hermann J. Klein, ISACS Chairman and Member of Germanischer Lloyd's Board, Tom Broadley, Managing Director at Lloyd's Register of Shipping and Emanuele Grimaldi, CEO at Grimaldi Group. Chairmen at gmec are Micky Arison, Chairman and CEO of the Carnival Group, Spyros Polemis, Chairman of the International Chamber of Shipping and Corrado Antonini, chairman of Fincantieri. Gmec 2010 is to bring together the stakeholder to identify the status quo and to show ways to move forward in global environmental protection.
Another new event is the Offshore Dialogue, a two-day workshop to be arranged on September 8th and 9th, with lecturers of international standing from the industry, institutions and associations. Participants are expected from the shipping and marine equipment industry, oil and gas and also wind energy sector, as well as from shipping companies and research institutes. According to figures by Douglas-Westwood Ltd, $167 billion is to be invested in only the deep-water sector between 2010 and 2014, and increase of 37% from the previous five year period. The investments in the offshore wind energy sector is estimated at $30 billion in Europe alone, by 2030, and $2 billion just in 2010, according to Trendresearch GmbH. John Westwood, Chairman of Douglas-Westwood Ltd is to open the conference. The Oil & Gas Dialogue will look into the market potential and current and future requirements for special-purpose ships for the offshore industry.
The Deep Sea Mining Dialogue will focus on the resources and technologies in this sector, and the Offshore WindEnergy Dialogue will look at the markets and technologies for special-purpose vessels for installation and maintenance.
The International Ship Finance Forum is to be arranged, already for the third time, on September 6th. The theme this year is "The Future of Ship Finance - Crises and Chances". With lecturers from the maritime sector and the financial world the Forum will cover subjects like winners and losers after the financial crisis, the new conditions and long-term effects for ship financing, the crisis and the position of the KG models and rescue schemes which really work for this sector.   The marine engine industry's CIMAC Circle panel discussion will this year be held on September 9th, around the topic "Total Cost of Ownership of Marine Propulsion Engines". SMM has traditionally been the meeting place for a number of events. This year a total of some 150 conferences, workshops, symposia and meetings are to be held.
This year, a new online visitor service system is to be set-up (from August, at www.smm-hamburg.com) for connecting visitors and exhibitors and help setting up meetings.