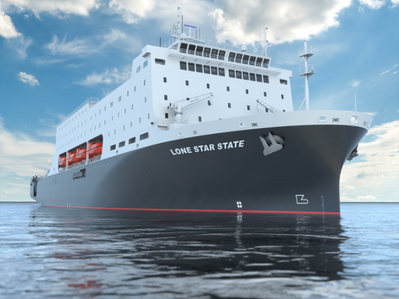 The Texas A&M Maritime Academy said it has been notified by the U.S. Department of Transportation Maritime Administration (MARAD) that the National Security Multi-Mission Vessel (NSMV) expected to arrive on its Galveston campus in 2025 will be named the Lone Star State.

The ship, which is slated to be built by Philly Shipyard, is the fourth in a new series of vessels specifically designed to support both maritime training needs and disaster response capabilities.

“The Galveston Campus is fulfilling critical components of Texas A&M University’s sea-grant mission and is perfectly positioned both strategically and geographically to provide the instruction and training necessary for the state to foster growth of the blue economy in the Gulf Coast region,” said Dr. John L. Junkins, interim president of Texas A&M University in College Station. “It is only fitting that one of our most visible assets prominently feature our state motto.”

Congress approved $325 million in funding to construct the NSMV in December 2020. The 524-foot state-of-the-art ship represents a significant investment by the federal government in supporting the future of the maritime industry and future merchant mariners in Texas. The NSMVs are designated as State-class vessels and each are named for the state in which a state maritime academy operates.

“The naming of the NSMV reinforces Texas’ strong commitment to the U.S. Merchant Marine and maritime industry and we are proud to be able to represent that commitment with the aptly named Lone Star State. We are grateful to both the state and MARAD for their support in training the future merchant mariners of Texas and this nation,” said Col. Michael E. Fossum, superintendent of the Texas A&M Maritime Academy and chief operating officer of the Galveston Campus.

The NSMV series replaces the aging fleet of training ships currently in use by the six state maritime academies in the United States. The vessels are equipped with numerous training spaces that can support up to 600 cadets at sea and also include critical disaster response capabilities in the Gulf of Mexico.

“The Texas A&M University System is vested in supporting the state as we lead efforts to transform disaster response and relief nationwide,” said John Sharp, chancellor of the Texas A&M System. “Federal and state support in securing the Lone Star State as an asset ensures rapid response capabilities in our own backyard, which happens to also be the most hurricane-prone region in the United States.”

Each year over 300 Texas A&M Maritime Academy cadets live, work, learn and train alongside one another during a two-month summer sea term that provides hands-on at-sea training and instruction. Cadets currently train aboard Massachusetts State Maritime Academy’s training ship, Kennedy, through a ship-sharing agreement with MARAD established in 2018. The Kennedy is expected to transfer to the Texas A&M Maritime Academy in 2023 to serve in place of the Lone Star State until its arrival in 2025.

The academy’s previous training vessel, Texas Clipper II, was reassigned in 2005 by the federal government after serving in disaster response efforts for Hurricanes Katrina and Rita. The General Rudder, a 224-foot training vessel with a maximum capacity of 50 cadets, is currently docked at campus and provides supplemental training year-round.

State academy training vessels are federally owned and available to support federal response efforts to national and international disasters. The Lone Star State is the fourth in a series of five NSMVs. The first three were assigned to the State University of New York Maritime Academy, Massachusetts Maritime Academy and Maine Maritime Academy. Philly Shipyard holds the exclusive contract for the five-ship deal.