Towboat Runs Aground in Florida 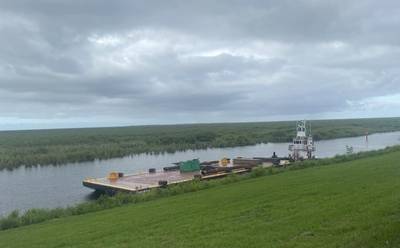 A towboat suffered a hull breach after running aground in the  Okeechobee Waterway, near Clewiston, Fla.

The captain of the 46-foot towing vessel Catherine notified U.S. Coast Guard Sector Miami watchstanders at approximately 8:30 p.m., Friday, stating the vessel and deck barge Mobro 130 ran aground, resulting in a breached hull and ruptured fuel tank. No injuries have been reported.

While the towing vessel was initially reported to have approximately 2,000 gallons of diesel fuel on board, the Coast Guard said there are no pollution concerns.

A waste management crew removed all the diesel fuel from the compromised fuel tanks at approximately 6 p.m., Saturday.

“MSD Lake Worth worked in close coordination with industry partners to ensure the environmental impact of pollution was minimized and responsibly cleaned up,” said Lt. Andrew Cole, Coast Guard MSD Lake Worth supervisor. “It is imperative that mariners maintain vigilance while navigating and fully understand the potential hazards on the waterways.”