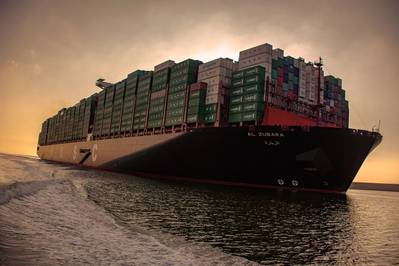 The event is one of the first in a series of activities being organized by UASC to celebrate 40 years in business and was attended by senior dignitaries and officials including Dr. Khaled Fahmy, Minister of Environment (Egypt), Admiral Mohab Mameesh, Chairman of the Suez Canal Authority, Basil Al-Zaid, Chief Financial Officer at UASC, Nevine El-Messeery CEO of AUB and Captain Emad Oraby, the General Manager of UASAC Egypt.

Attendees were taken on a guided tour on board M.V. Al Zubara, while sailing through the new Suez Canal passage, where Admiral Mohab Mameesh presented a brief introduction to the strategic project.

“Initiating UASC’s 40th anniversary celebrations from the Suez Canal makes perfect sense given its strategic location, being the fastest maritime route connecting Asia to Europe. UASC’s vessels passed through the Suez Canal around 295 times last year, reflecting its’ importance to us. Having the new canal operational has helped to reduce our vessel’s transit time, which of course, reflects positively on the company”, said Basil Al-Zaid, Chief Financial Officer at UASC. “This celebration is to mark our long term partnership with the Suez Canal and Ahli United Bank, which not only facilitates our passage payments in the Canal, but has also contributed to financing UASC’s current newbuilding program, comprising 17 new ships among the most cost-efficient and environmentally friendly in the world.”

Ahli United Bank, with a strategic goal of developing support for the region’s economy, established a special division to support the shipping industry. The bank facilitates canal passing payments, port projects and berths, as well as supporting the financing of the investment project to develop the canal area.

To date, UASC has received five 18,800TEU class vessels; Barzan, Al Muraykh, Al Nefud, Al Zubara and Al Dahna respectively. This superior series of vessels are considered the world’s greenest due to their outstanding environmental credentials and first-class technology on board. Putting these advanced vessels to the test Al Muraykh achieved a record breaking load of 18,601 TEU last month. This unprecedented westbound shipment was also UASC’s highest utilization to date of this very eco-efficient class, meaning the CO2 output per TEU on this journey is set to be more than 60% lower if the same containers were shipped on board a 13,500 TEU ship.