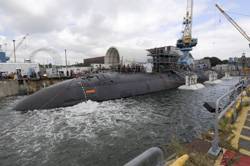 San Juan and its crew of 13 officers and 121 enlisted personnel arrived at PNSY Apr. 8, 2010. While at the shipyard, the sub is undergoing an engineered overhaul consisting of various maintenance work and several system upgrades.

"San Juan is poised for a successful end game," said Shipyard Commander Capt. Bryant Fuller. "She has made more progress in her availability prior to undocking than any engineered overhaul the shipyard has performed in the past. With the significant amount of physical work complete, the project team is looking to deliver San Juan in the shortest time possible."

Project Superintendent D.K. Horne said the project has faced its share of material and resources challenges, but attributes their ability to successfully overcome those challenges to a single factor - teamwork.

"Everything that has gone well is because of teamwork," said Horne. "The team has been very flexible. We partnered our most seasoned mechanics and experienced workers from other shipyards with apprentices and new workers to get the best productivity possible."

Horne also emphasized the role the ship's crew played in the success of the availability.

"I've had the opportunity to work with a lot of outstanding ships over the years," said Horne. "And I've absolutely never worked with a better ship than this one. From the captain to the most junior sailor - this crew has a tremendous sense of ownership."

"It's been great working with the ship, but they know they don't belong here - they belong at sea," said Horne. "Our overall goal is to put the shipyard in San Juan's rearview mirror - we're all working together to make this happen."

The on-time or early completion of submarine availabilities are critical in the maintenance of the Fleet and is essential to maintaining warfighter readiness. PNSY, a field activity of the Naval Sea Systems Command, provides the U.S. Navy's submarine fleet with quality overhaul work in a safe, timely and affordable manner. This includes a full spectrum of in-house support - from engineering services and production shops, to unique capabilities and facilities, to off-site support - all of which serves the multifaceted assortment of fleet requirements.