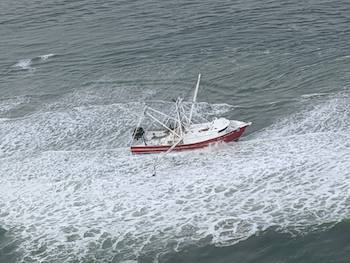 A Unified Command was established on Wednesday afternoon to oversee the safe removal of fishing vessel Sea Angels, which ran aground in the vicinity of Browns Inlet, North Carolina.

On Dec. 9, 2019, fishing vessel Sea Angels ran aground near a restricted navigation area in Browns Inlet, where the potential of unexploded military ordnance exists due to active live fire training in the area dating back to World War II.

There is an estimated 15,000 gallons of diesel fuel onboard the fishing vessel; however, there have been no reports of pollution or hazards to the general public.

The Unified Command consists of U.S. Coast Guard, Marine Corps Base Camp Lejeune, the State of North Carolina, Onslow County Emergency Management, and the owner of the vessel.

“Our priority is ensuring the safety of both response personnel and the public while mitigating potential environmental impacts,” said Capt. Bion Stewart, commander of Coast Guard Sector North Carolina. “We are thankful for the expertise of our interagency partners, which is instrumental to the response efforts.”

Salvage operations to remove Sea Angels are being arranged by the owner and overseen by the Coast Guard.