Unmanned Aircraft to Fly Off US Aircraft Carrier 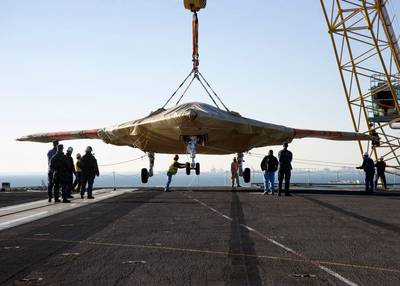 The X-47B, which boasts a wingspan of more than 62 feet (wider than that of an F/A-18 Super Hornet), will demonstrate seamless integration into carrier flight deck operations through various tests. During each demonstration, the X-47B will be controlled remotely via a hand-held control display unit (CDU).

Truman will be the first modern aircraft carrier to host test operations for an unmanned aircraft.  Capt. Jaime Engdahl, N-UCAS program manager, said the X-47B's delivery aboard Truman was among the most historic moments in the program's history.  "This is a very important moment for the X-47B," said Engdahl. "The moment the aircraft set down on Truman's deck was the moment it officially met the fleet."

Cmdr. Kevin Watkins, N-UCAS's flight test director, agreed with Engdahl's sentiment.  "Bringing the X-47B aboard Truman is a big milestone for the program," said Watkins. "We've been testing the aircraft for the last several years and to finally put it on a ship is so exciting. If these tests are successful, they will prove that the future for unmanned aircraft is wide open."

The X-47B test will be conducted over a three week period which will include in-port and underway demonstrations aboard the aircraft carrier.