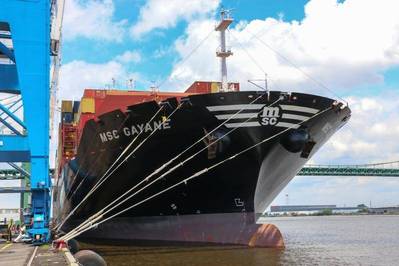 A former heavyweight boxer from Montenegro was charged by the U.S. Department of Justice on Monday with trafficking in 22 tons of cocaine worth over $1 billion, most of which was part of one of the largest cocaine seizures in American history.

Goran Gogic, 43, was arrested on Sunday night while trying to board a flight to Zurich from Miami International Airport, after being indicted by a grand jury in New York.

A lawyer for Gogic did not immediately respond to requests for comment.

The charges stem from the seizures of 19,930 kilograms (22 tons) of cocaine from three commercial cargo ships in 2019, including 17,956 kilograms (19.8 tons) from the MSC Gayane while it was docked at Philadelphia's Packer Avenue Marine Terminal.

Prosecutors said the conspirators transported cocaine to Europe from Colombia through American ports, using cranes and nets at night to hoist drugs onto cargo ships from approaching speedboats along the ships' routes.

The complex operation required knowledge of each ship's crew, route and location data, and that there was room to store drugs in shipping containers that were already aboard, prosecutors said.

According to court papers, Gogic oversaw the scheme's logistics, coordinating with crew members, Colombian traffickers and European dockworkers to benefit himself and his Balkan-based cartels.

In a statement, U.S. Attorney Breon Peace in Brooklyn called Gogic's arrest and indictment "a resounding victory for law enforcement."

At least eight crew members from the Gayane have pleaded guilty to conspiracy charges over their roles.

According to online records, Gogic was a boxer from 2001 to 2012, winning 21 bouts and losing four with two draws.