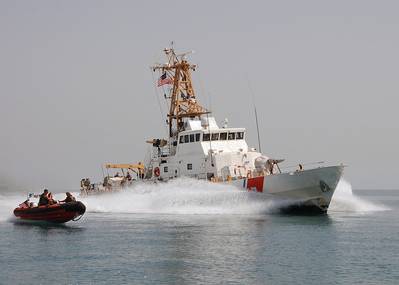 Vice Adm. Steven Poulin, commander of U.S. Coast Guard Atlantic Area, was in attendance to honor the years of service Aquidneck, Adak, and their crews, provided to the Coast Guard.

“Thank you to every single crew member who has ever served aboard Aquidneck and Adak, from the plank owners to the final crew and all the crews in between,” Poulin said. “You selflessly volunteered to deploy from your family, friends, and home, accepting the inherent risks and adversities to serve your country. You built a legacy for these two cutters that will not soon be forgotten.”

As part of the Coast Guard’s Fast Response Cutter program, the service is acquiring 64 fast response cutters total, with six of those assigned to U.S. Coast Guard Patrol Forces Southwest Asia. Aquidneck and Adak were replaced by the Sentinel-class FRCs USCGC Charles Moulthrope (WPC 1141) and USCGC Robert Goldman (WPC 1142), which arrived at NSA Bahrain on May 25.

Aquidneck’s namesake comes from Aquidneck Island in Rhode Island. It was originally homeported in Portsmouth, Va., and later shifted to Fort Macon, N.C. It was employed in search and rescue, counter-drug, and other law enforcement operations domestically for more than 16 years.

Adak’s namesake comes from Adak Island in Alaska. It was originally stationed in Sandy Hook, N.J., in 1991 and laid claim to the third-largest cocaine bust in Coast Guard history when the crew stopped a fishing vessel off the coast of New York. In August 1994, it took part in Operation Able Vigil, which rescued over 29,000 Cuban migrants from unsafe rafts and makeshift craft attempting to reach American shores. The operation consisted of over 50 Coast Guard cutters and U.S. Navy ships, making it the largest Coast Guard-led naval operation since World War II.

In late 2002, Aquidneck and Adak received orders to the U.S. Fifth Fleet area of operations supporting Operation Iraqi Freedom. Within one week of their arrival in Bahrain, they were underway conducting maritime interdiction operations in the North Arabian Gulf.

For the next 18 years, the two cutters remained forward deployed out of Bahrain under U.S. Patrol Forces Southwest Asia, attached to Commander, Task Force 55, conducting operations to ensure the free flow of commerce throughout the region’s critical waterways.

CTF 55 operates in the U.S. Fifth Fleet area of operations, supporting naval operations to ensure maritime stability and security in the Central Region, connecting the Mediterranean and Pacific through the Western Indian Ocean and three critical chokepoints to the free flow of global commerce.