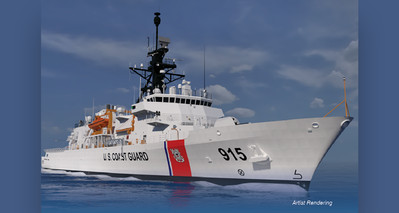 The U.S. Coast Guard on May 20 announced it modified its current contract with Eastern Shipbuilding Group (ESG) so installation of the Athena combat weapons system and multi-mode radar system will be completed during the production phase of the offshore patrol cutter (OPC). The Athena system, radar and armament of the OPC are provided to the Coast Guard as Navy type-Navy owned government furnished equipment.

Prior to this modification, installation of both systems was to occur after contract delivery while each cutter was in its homeport. The Navy has completed development, integration and testing of the Athena and radar systems, enabling the Coast Guard to shift to production-phase installation. Performing this work prior to delivery reduces the technical risks associated with post-delivery installation and delivers mission-ready OPCs to the fleet as soon as possible, the Coast Guard said.

The first four OPCs are currently in production at ESG’'s shipyard in Panama City, Fla.

According to the oat Guard, the OPC meets the its need for cutters capable of deploying independently or as part of a larger task force and is essential to stopping smugglers at sea, rescuing mariners, enforcing fisheries laws, responding to disasters, interdicting undocumented individuals and protecting the nation. The acquisition of 25 OPCs will complement the capabilities of the service’s national security cutters and fast response cutters as an essential element of the Department of Homeland Security’s layered maritime security strategy, the service said.