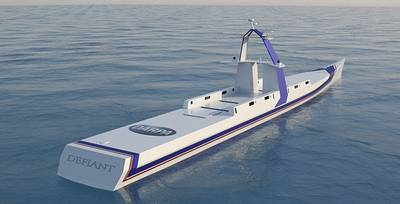 The U.S. Department of Defense's research and development agency is moving into the second phase of a project to to build and demonstrate a new seagoing unmanned surface vessel.

The Defense Advanced Research Projects Agency (DARPA) on Monday announced  it is moving into Phase 2 of the No Manning Required Ship (NOMARS) program, which seeks to build and demonstrate a revolutionary new medium unmanned surface vessel (MUSV) that can go to sea and perform missions with unprecedented reliability and availability, while carrying a significant payload. The agency selected Serco Inc.’s design to move forward at the conclusion of Phase 1.

NOMARS took a clean-sheet approach to ship design, holding firmly to the requirement that there will never be a human on board the vessel while it is at sea – including during underway replenishment (UNREP) events. By eliminating all constraints and requirements associated with humans, NOMARS opened up the design space to novel ship configurations and capabilities that could never be considered for crewed vessels.

NOMARS is also pushing the boundaries on ship reliability. Because there is no crew on board to perform maintenance, NOMARS required new approaches for power generation, propulsion, machinery line-up and control schemes to ensure continuous functionality throughout a long mission in all weather, temperature, and sea states.

“NOMARS plans to demonstrate a next-generation completely unmanned ship that will enable entirely new concepts of operations,” said Gregory Avicola, program manager in DARPA’s Tactical Technology Office. “We will enable methods of deploying and maintaining very large fleets of unmanned surface vessels that can serve as partners, across the globe, for the larger crewed combatants of the U.S. Navy.”

In Phase 1, Serco developed a new Design Space Exploration (DSX) toolset that can evaluate spaces with a variety of parameters and outputs millions of ship designs to meet a diverse set of performance objectives and constraints. Serco used their DSX tool to create a set of ship designs ranging from 170-270 metric tons, then refined those into a single ship for the preliminary design review, which the company dubbed Defiant. In Phase 2, Serco will finalize ship design, build the ship, and work through a series of rigorous testing activities before taking it to sea for a three-month demonstration event. Serco is working with Beier Integrated Systems LLC, Caterpillar, DRS Naval Power Systems Inc., ICE FLOE LLC (dba Nichols Brothers Boat Builders), Metron Inc., Serco Inc. (div Maritime Engineering Operations), Submergence Group LLC, and Thrustmaster of Texas Inc. on the project.

Defiant will be the first of its kind. The 210-metric ton MUSV-class ship aims to maximize performance, reliability, and maintenance efficiency while still carrying significant payload at tactically useful ranges. The goal is to achieve ultra-reliability objectives by integrating distributed hybrid power generation, podded propulsors, and high-capacity batteries. A key philosophy of NOMARS is “graceful degradation,” which allows individual equipment to fail over time by having enough system-level redundancy to meet full system requirements at speeds of at least 15 knots after one year at sea. The major system components of the selected design are modularized, so repairs can be conducted with equipment typically found in yacht-yards worldwide. This maintenance philosophy supports rapid turnaround, allowing the ships to spend a majority of their lifetime at sea performing missions.