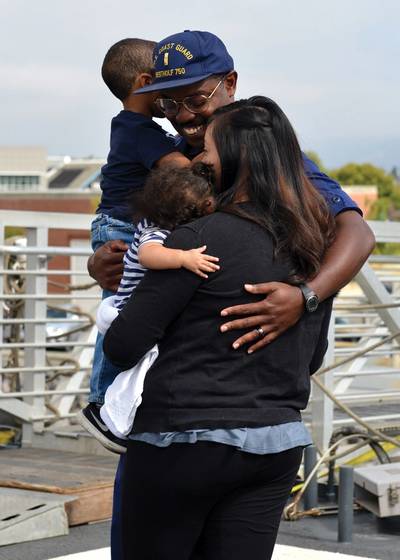 When appropriations lapse, as they did on December 22, agencies must shutdown operations unless there is an exception. The federal Antideficiency Act prohibits agencies from incurring obligations in the absence of appropriations except where specifically authorized by law (which is the case, for example, with the supplying of troops in the field) or with respect to other excepted activities.

Among the most important of these excepted activities are national security activities, activities separately funded, (such as through left-over prior period funding, funding from ongoing fees and funding from unaffected appropriations, such as from the U.S. Department of Defense which has been fully funded), and activities necessary to protect life and property. Federal employees who do not fall into some excepted category are furloughed and cannot perform official functions. Excepted employees are paid to the extent of remaining funds, but then have to work without pay.

The partial closure of certain agencies has a negative effect on many industries, including the maritime industry, which is growing over time. In addition to the fact that agencies can no longer contract for services until the shutdown is over, agencies also cannot, in many instances, accept regulatory filings, issue regulatory permissions and approvals, or provide regulatory advice. If the shutdown lasts long enough, the effects could be severe, including the cancellation or postponement of projects, such as offshore wind projects, because of the resulting uncertainty.
The following is a summary of the status of three primary maritime agencies affected by the shutdown.

U.S. COAST GUARD
The Coast Guard reports that of its 53,000 employees, 43,000 are considered excepted (including all uniform personnel) and are working without pay, and about 10,000 Coast Guard employees are furloughed and prohibited from working. The Coast Guard’s 41,000 active duty uniformed personnel have the dubious distinction of being the only U.S. uniformed military service members who are not being paid while they serve their country.

The Coast Guard indicates that it is still continuing operations authorized by law that provide for national security or that protect life and property, such as search and rescue, port and homeland safety and security, law enforcement, and environmental response activities. However, the Coast Guard has been forced to suspend mission activities that do not fall within those categories.

For example, the Coast Guard has been forced to suspend or limit the review and approval of vessel response plans, vessel security plans, shipboard oil pollution emergency plans, and certificates of financial responsibility, all of which are required for U.S. flagged vessels and for foreign flag vessels planning to enter U.S. waters. As a consequence, while the Coast Guard personnel who remain at their desks are working to provide necessary certificates and approvals on a “just-in-time” basis, certain U.S. vessels may not be able to operate, and certain foreign vessels may be unable to deliver their cargoes to the U.S., or may be delayed in making U.S. port calls. 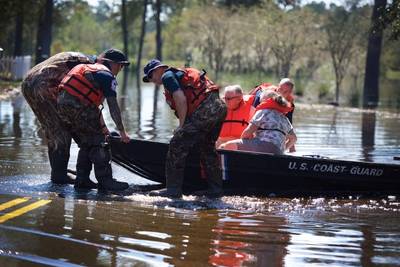 Members of the U.S. Coast Guard’s Gulf Strike Team rescue an elderly couple after floodwaters from the Waccamaw River took over their apartment complex in Horry County, South Carolina, Sept. 19, 2018. As a result of Hurricane Florence, certain rivers flooding from the north continue to pose a threat to communities throughout the Carolinas. U.S. Coast Guard photo by Petty Officer 1st Class Jon-Paul Rios.

The Coast Guard is still carrying out domestic vessel inspections and foreign vessel port state control examinations, but is having to do that work with only uniformed personnel, since the agency is not able to use its civilian marine inspector workforce. That workforce was built up over the past several years in response to recommendations to improve the experience and skill level of the Coast Guard’s marine inspection program. Their absence is leaving a significant gap in the Coast Guard’s ability to manage inspections and port state control activities. In addition, if a marine casualty were to happen during the shutdown, while the Coast Guard’s active duty personnel may be able to start the marine casualty investigation process, their ability to pursue investigations to identify critical safety issues and implement needed actions will be limited.

The shutdown is effectively curtailing activities related to vessel construction, sales, repairs, and financing. The Coast Guard is currently unable to carry out legally required vessel plan reviews to ensure that new vessels are built, or existing vessels are repaired or rebuilt, in accordance with Coast Guard and international safety regulations. Persons seeking to purchase and document vessels with the U.S. Coast Guard, or obtain mortgage loans on documented vessels, cannot currently do so. Likewise, lenders and other creditors cannot obtain information about vessel mortgages and liens needed for vessel financing transactions, and cannot record mortgages against vessels to secure loans.
American seafarers are not currently able to take examinations required for licenses and other credentials, and cannot update or renew their mariner credentials. While the Coast Guard is attempting to mitigate the impacts of the shutdown on seafarers by extending the expiration dates of credentials, persons who have worked hard to advance to a higher grade of license must wait.

Because the majority of the mostly civilian workforce at the Coast Guard’s National Pollution Fund Center has been furloughed, the Center is not able to process or pay claims for pollution damage, even where settlement agreements have already been reached.

The longer the shutdown continues, the greater the backlog will be for the currently suspended Coast Guard activities. Once the shutdown ends, persons working with the Coast Guard are likely to see significantly greater response times for plan approvals, processing of vessel transactions, licensing, the payment of claims, and other necessary regulatory actions.

U.S. MARITIME ADMINISTRATION
MARAD reported that as of January 11, 2019, 466 of its total staff of 740 were excepted and at work with the rest furloughed. About 168 of that 466 total work at the U.S. Merchant Marine Academy and a significant portion of the rest work with respect to the Ready Reserve Force of standby national defense cargo vessels. The Merchant Marine Academy is, however, short staffed with another 86 staff on furlough. MARAD indicates that it will continue to function with respect to its missions in connection with maritime safety of life and property and security of vessels for the U.S. Government during the shutdown but most offices are not fully staffed.

Although efforts have been made to scrape together prior year money to continue paying the 60 vessels in the Maritime Security Program (MSP), that money will soon run out and contractors will not be receiving monthly stipend amounts intended to retain the vessels for national security use. Upon such non-payment, the law authorizes the owners of such vessels to leave the U.S. flag and terminate their obligations to make the vessels available for U.S. Government use in a national emergency.

FEDERAL MARITIME COMMISSION
Unlike the Coast Guard and MARAD which have maintained substantial but reduced operations, the Federal Maritime Commission (FMC) announced on December 26, 2018 that it would be ceasing all operations until appropriations have been renewed.

Specifically, the Commission stated that it will not respond to any email or phone inquiries, that online databases will not be updated, and that the Commission will not accept any new filings of carrier or marine terminal operator agreements, service contracts, complaints, requests for dispute resolution services, or otherwise. None of the online databases, including the listing of effective shipping service contracts, the common carrier tariff list, or the list of licensed and bonded ocean transportation intermediaries will be available during the suspension of services.

With the Federal Maritime Commission shuttered indefinitely, the industry may be forced to choose in many cases between foregoing business opportunities or violating the law. For example, carriers cannot comply with requirements that agreements between common carriers, such as space charters, be on file and in effect with the Commission before the common carriers may act under such agreements, and shippers cannot update or enter into new service contracts on file with the Commission if the Commission refuses to accept filings of any kind. Similarly, with the Commission no longer accepting complaints, there will be no forum for shippers, passengers or other consumers to pursue relief under the Shipping Act, effectively suspending enforcement of the Shipping Act until further notice.