U.S. to Reward Tips on Illicit Cargos in the Middle East 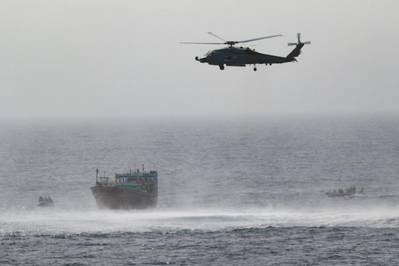 GULF OF OMAN (May 16, 2022) An MH-60R Seahawk from Helicopter Maritime Strike Squadron (HSM) 35, Detachment 1, provides aerial support to an interdiction team from guided-missile destroyer USS Momsen (DDG 92) approaching a fishing vessel May 16. The vessel was seized while transiting international waters in the Gulf of Oman. Photo By: MC3 Lily Gebauer

The U.S. Navy will for the first time reward individuals for providing information that leads to the seizure of illicit cargos such as illegal weapons or narcotics in waters across the Middle East, it said on Tuesday.

The U.S. Naval Forces Central Command (NAVCENT), which is headquartered in Bahrain and covers strategic waterways such as the Suez Canal and Strait of Hormuz, said the rewards could be in cash or items such as boats.

"NAVCENT could potentially reward a maximum $100,000 payout for information or non-lethal assistance that supports counterterrorism operations or leads U.S. naval forces to successfully seize illicit cargo such as illegal weapons or narcotics," it said in a statement on its website.

"Rewards can also be non-monetary and include items like boats, vehicles, food or equipment," it said.

The statement gave a phone number in Bahrain where tips can be reported, in addition to the website dedicated to the U.S. Department of Defense's rewards program.

The statement did not mention a specific country as being a target of the reward program, but its implementation could complicate the shipments of Iranian weapons to Tehran's allies in Yemen, Syria, and Lebanon.