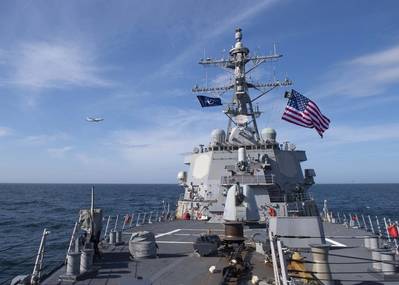 The United States will send two warships to the Black Sea next week, Turkey said on Friday as Russia, which has beefed up its military forces near Ukraine, accused non-coastal NATO powers of increasing naval activity in the region.

Washington says Russia has amassed more troops on Ukraine’s eastern border than at any time since 2014, when it annexed Crimea from Ukraine and backed pro-Russian separatists in the eastern Donbass region of Ukraine.

Violence has flared between Ukrainian troops and the separatists, spurring fears of a major escalation. Russian President Vladimir Putin accused Ukraine on Friday of “dangerous provocative actions” in the Donbass region during a telephone conversation with Turkey’s President Tayyip Erdogan.

Turkey, a NATO ally, said on Friday the United States would deploy two warships to the Black Sea from April 14-15.

“A notice was sent to us 15 days ago via diplomatic channels that two U.S. warships would pass to the Black Sea, in line with the Montreux Convention. The ships will remain in the Black Sea until May 4,” Turkey’s foreign ministry said.

The 1936 Montreux accord gives Turkey control over the Bosphorus and Dardanelles straits, which connect the Mediterranean to the Black Sea. It also limits access of naval warships and governs foreign cargo ships.

NATO activity
Russian Deputy Foreign Minister Alexander Grushko raised concerns on Friday over what he said was increasing Black Sea naval activity by powers that did not have a coast line in the region, an apparent reference to the United States.

“The number of visits by NATO countries and the length of the stay of (their) warships have increased,” he was quoted as saying by the Interfax news agency.

According to a Reuters witness who keeps track of ships passing through Turkey’s Bosphorus strait, the United States and NATO increased their presence in the Black Sea early this year, when U.S. President Joe Biden’s administration took power.

The Reuters witness said the level had reached that seen in 2014-2015 at the time of the Crimea annexation.

Ukraine’s President Volodymyr Zelenskiy was due to meet Erdogan in Turkey on Saturday on a previously scheduled visit.