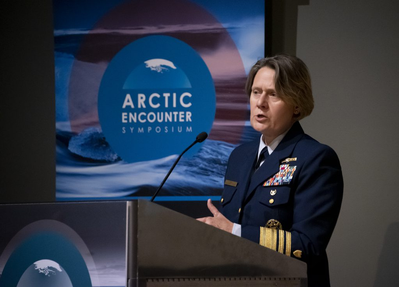 During her keynote speech at the symposium, Vice Adm. Linda Fagan said, “The tyranny of distance and the harsh Arctic climate pose significant challenges to agencies charged with providing maritime safety and security to all Americans, including the hundreds of villages and thousands of seasonal workers in the U.S. Arctic.”

“Search and rescue, law enforcement, marine safety, waterways management, and other Coast Guard missions are complicated by the Arctic’s dynamic and remote operating environment,” Fagan said. “The Coast Guard will collaborate with stakeholders to develop new practices and technology to serve the maritime community and manage risk in the region.”

The Coast Guard released its Arctic Strategic Outlook April 22, 2019, which reaffirms the service’s commitment to American leadership in the region through partnership, unity of effort, and continuous innovation.

“Changes in regional geopolitical competition, economic drivers, and the physical environment prompted our Coast Guard leaders to take a fresh look at our existing missions, activities, and strategic objectives in the Arctic,” Fagan said. “We are releasing it four years early in recognition of the accelerated security, economic and environmental trends in the region, and the resulting demand for U.S. Coast Guard leadership.”

The Coast Guard has been the sole provider of the nation’s polar icebreaking capability since 1965, and is seeking to increase its icebreaking fleet with six new polar security cutters in order to ensure continued national presence and access to the Polar Regions.

Tuesday, the U.S. Coast Guard and U.S. Navy awarded VT Halter Marine Inc. of Pascagoula, Mississippi, a contract for the design and construction of the Coast Guard’s lead Polar Security Cutter. The initial award is valued at $745.9 million and supports non-recurring engineering and detail design of the Polar Security Cutter class as well as procurement of long lead-time materials and construction of the first ship. The contract also includes options for the construction of two additional PSCs. If all options are exercised, the total contract value is $1.9 billion.

“The Polar Security Cutters will support the full range of Coast Guard missions, to include search and rescue, law enforcement, environmental response, and national defense,” Fagan said. “This investment will enable America to project presence in the Polar Regions.”

Lastly, Fagan discussed the Coast Guard’s deployment of technology in space to better monitor the region.

Last December, in conjunction with the DHS Science and Technology Directorate, the Coast Guard ventured into space with the Polar Scout project, launching two shoe-box sized cube satellites into a low-earth polar orbit. The satellites send data to two ground control stations; one at the U.S. Coast Guard Academy in New London, Connecticut, and the other at the University of Alaska in Fairbanks, Alaska. Named Yukon and Kodiak, the miniature satellites are specifically tailored to detect 406 MHz emergency distress beacons.

“This Polar Scout initiative should provide valuable insight on the process, cost, and feasibility of acquiring and using organic satellites for Coast Guard missions,” Fagan said. “We’re hoping the use of such satellites may improve communications in the Arctic, assist in monitoring large areas for illegal activity and help to assist mariners in distress.”

With the Arctic Strategic Outlook, Polar Security Cutters and innovative technologies such as the Polar Scout project, the Coast Guard continues to serve as the nation’s primary maritime presence in the polar regions.

“Through partnerships, unity of effort, continuous innovation, and persistent investment, we can operate effectively and strengthen a rules-based order that promotes resilience and prosperity in the shared environment we call the Arctic,” Fagan said. “The nation needs a modern, flexible, and innovative Coast Guard to meet the challenge of providing holistic security in the novel and dynamic Arctic maritime domain. As the Arctic changes, America’s Coast Guard will adapt and innovate to be always ready.”