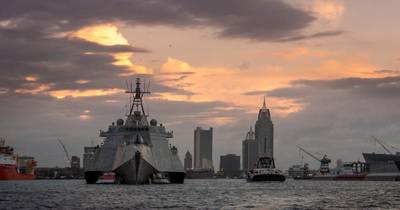 “I am proud of how the Austal team has come together again, in the middle of this pandemic, only a week after a Cat 2 hurricane made landfall in our backyard, completing another major milestone for one of our Navy ships - especially one so near and dear to us, named after our great city of Mobile, Alabama,” said Austal USA President Craig Perciavalle. “This is proof of what happens when we work together with our Navy teammates to form an incredibly strong team that just gets the job done, and done the right way!”

Acceptance trials involve the execution of intense comprehensive tests by the Austal USA-led industry team while underway, which demonstrate to the Navy the successful operation of the ship’s major systems and equipment. This is the last significant milestone before delivery of the ship.

The Independence-variant LCS is a high-speed, shallow-draft, focused-mission ship capable of operating independently or in a group. These ships are designed to defeat growing littoral threats and provide access and dominance along coastal waters, yet capable of open-ocean operation. A fast, maneuverable and networked surface-combatant, LCS provides the required warfighting capabilities and operational flexibility to execute focused missions such as surface warfare, mine warfare and anti-submarine warfare. USS Gabrielle Giffords (LCS 10) recently completed a successful deployment with the Pacific fleet and ten other Independence-variant LCS are homeported in San Diego.