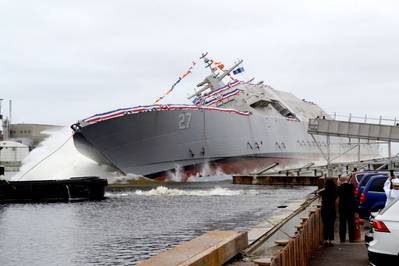 The ship’s sponsor, Polly Spencer, broke the ceremonial champagne bottle on the bow of the ship declaring the vessel christened. As the bottle broke and champagne flowed, the vessel was launched into the Menominee River.

The 378-foot Freedom-class littoral combat ship will be the third commissioned ship in U.S. naval service named after Nantucket.

Marinette Marine was awarded the contract to build the vessel in October 2017.