USS Ticonderoga (CG 47) to be Recycled in Texas 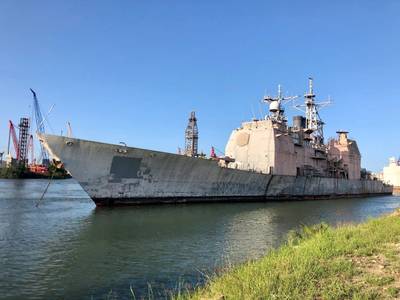 A contract to recycle an out-of-service U.S. Navy guided-missile cruiser has been awarded to International Shipbreaking Limited, LLC., one of the world’s largest green ship recycling companies.

The USS Ticonderoga (CG 47), decommissioned in 2004, concluded her final voyage last week to the Port of Brownsville, Texas, where full dismantling will commence with 98% of all removed materials being recycled.  The recycling work, which requires complete demilitarization of the entire ship, is scheduled to be completed in 2021.

USS Ticonderoga (CG 47) was built at Ingalls Shipbuilding, in Pascagoula, Miss. and delivered to the Navy on December 13, 1982. The warship was the lead vessel of the Ticonderoga class of Guided Missile Cruisers and was the fifth ship in U.S. Navy history to bear the name.

She has an impressive service history and provided naval gunfire support off the coast of Lebanon on her maiden voyage in 1984. In 1986, she served as the lead ship crossing the ‘Line of Death’ off the coast of Libya and removed Surface to Air Missile batteries that had launched a SA-5 missile against an F-14 from USS America (CV 66). She was assigned to the USS Dwight D. Eisenhower (CVN 69) Battle Group and participated in; Operation Desert Shield in 1990, Operation Southern Watch (the enforcement of the no-fly zone over Iraq) and Operation Deny Flight, (the U.N.-mandated no-fly zone over Bosnia) in 1995. From 2001 to 2004, USS Ticonderoga (CG 47) participated in security and counter-narcotics operations out of homeport Pascagoula, Miss. Following the terrorist attacks of September 11 in 2001, she got underway the next day at 8 a.m. to support Operation Noble Eagle (protecting airspace along the Gulf Coast).

Chris Green, Senior Manager at International Shipbreaking Ltd, said, “We take great pride in having been awarded the Defense Logistics Agency (DLA) contract to recycle this historic vessel.  The USS Ticonderoga (CG 47) has significant sentimental meaning to the men and women who served our country and spent a part of their lives with her. She will be recycled in a safe, respectful and environmentally responsible manner.”