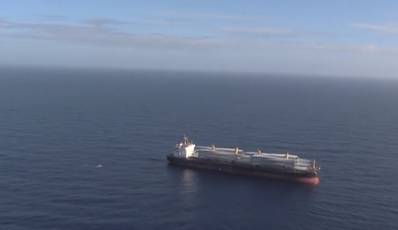 Coast Guard watchstanders instructed the vessel to make way toward shore and planned to coordinate response once the vessel was within aircraft range.

Upon receiving the mission, the 129th Rescue Wing launched a C-130 aircraft carrying pararescue jumpers just after 2 p.m. Wednesday. The crew arrived near the vessel around 7 p.m. Wednesday and the pararescue jumpers executed a static-line jump into the water. Once they were aboard the Ocean Applaud, they provided emergency medical aid to stabilize the patient.

The C-130 returned to base and the pararescue jumpers remained on the ship to monitor and care for the patient throughout the week. The 129th launched two HH-60 Pave Hawk helicopters Friday morning to recover the pararescue jumpers and the patient, who was transferred to awaiting EMS and taken to Stanford Hospital in Palo Alto in stable condition.

“The 129th Rescue Wing, like what we did with the Grand Princess, continues to have a great working relationship with the United States Coast Guard,” said Col. Jeffrey Waldman, wing commander.

The 11th Coast Guard District Command Center, located in Alameda, is responsible for all marine and aviation rescue operations across 3.3 million square nautical miles of water from the California-Oregon border south to near the Galapagos and west to waters half way between California and Hawaii.