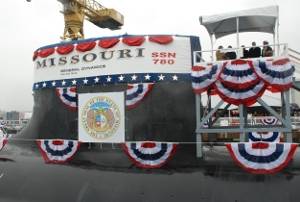 With the spray of bubbly from a champagne bottle, PCU Missouri (SSN 780), the Navy's newest Virginia-class attack submarine, was christened during a late morning ceremony at General Dynamics Electric Boat in Groton, Conn., Dec. 5.

Missouri, the fifth Navy ship to be named in honor of the people of the "Show Me State," is "a link in the honored chain of ships to bear the name; another chapter in the storied history of the Naval service," said Secretary of the Navy (SECNAV) Ray Mabus.

SECNAV and Secretary of Defense Robert M. Gates were among the many dignitaries and guests who attended the ceremony.

"We gather for this christening with the knowledge that Missouri's service builds upon a proud lineage of her namesake," said U.S. Senator Claire McCaskill of Missouri, the principal speaker for the event. "We gather in the belief that her service to our country – silent as it may be – will keep Americans safe by deterring would-be aggressors. We also gather today to confidently set the tone for the character of this submarine, which will sail with one foot in her proud past, but with an eye toward the future and all the potential that it holds."

Becky Gates, wife of the secretary of defense, serves as ship's sponsor. She broke the traditional champagne bottle against the boat's sail. Her initials were welded into a plaque inside the boat during last year's keel laying ceremony.

The christening marks another milestone for the submarine, which is "now 90 percent complete with construction and is on track to finish $72 million under budget and well ahead of scheduled," according to director of Naval Nuclear Propulsion Adm. Kirkland H. Donald.

The last Missouri, a legendary battleship, saw action in World War II, the Korean War, the Persian Gulf War, and was also the site where Fleet Adm. Chester Nimitz, Gen. Douglas MacArthur and many other U.S. and Allied officers accepted the unconditional surrender of the Japanese at the end of World War II Sept. 2, 1945.

Missouri is expected to be delivered to the Navy in 2010 and begin her missions.

"She may patrol the waters of the Western Pacific or the North Atlantic. She may work with the Coast Guard and our international partners to stem the flow of illegal narcotics into our country. She may support our strike groups. And she will deploy to answer whatever the unknown challenges of the future, wherever they may be in support of our Maritime Strategy and our national objectives," said Mabus.

The 7,800-ton Missouri is being built under a teaming arrangement between General Dynamics Electric Boat and Northrop Grumman Shipbuilding - Newport News. She is 377 ft long, has a 34-ft beam and will be able to dive to depths of greater than 800 ft and operate at speeds in excess of 25 knots submerged. Missouri is designed with a nuclear reactor plant that will not require refueling during the planned life of the ship – reducing lifecycle costs while increasing underway time.