Long Beach Cargo Volumes Edge up in May 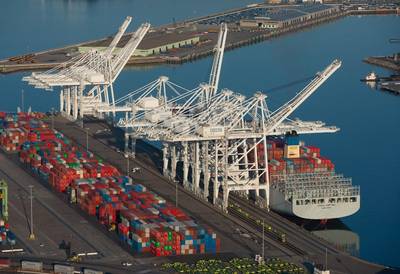 Container cargo numbers improved slightly at the Port of Long Beach in May, rising 0.8 percent compared to the same month last year when the docks were still busily catching up after several months of congestion.

With cargo volumes near all-time peak levels, May’s 640,566 TEUs qualified the month as the second-busiest May in the port’s 105-year history.
Imports were up 1 percent to 330,639 TEUs, exports were up 2 percent to 138,594 TEUs, and empties were flat at 171,333 TEUs, off just 0.4 percent compared to the same month last year. The year-to-date total is down 1.5 percent compared to the first five months of 2015.
The port’s numbers are in line with trends observed by the National Retail Federation (NRF), which reports that inventories remain high for U.S. stores and warehouses, muting demand for oceangoing trade.
As noted by the NRF, the year-over-year comparisons to 2015 are difficult to make, given the unusual patterns last year when the industry ramped up activity following the congestion slowdowns at the start of that year, and comparisons to prior years are skewed because the nation was still in recovery mode from the historic recession that began in 2008.