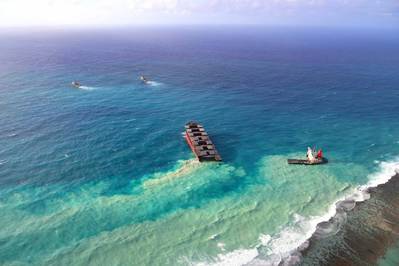 The bow section of the stricken bulk carrier Wakashio has been towed to deeper waters eight nautical miles off Mauritius after the grounded vessel broke apart atop a coral reef near Pointe d'Esny off the Indian Ocean island's east coast.

The Japanese-owned Wakashio struck the reef on July 25 and began spilling oil on August 6, triggering the country's worst ecological disaster and prompting the government to declare a state of environmental emergency.

About 1,000 metric tons of fuel oil spilled from the cracked hull of the 300-meter, Panamanian-flagged vessel into the water and onto shore before salvage crews managed to remove most of the ship's remaining oil. The condition of the large 203,130 dwt bulker continued to deteriorate, and the vessel split in two on Saturday.

The bow section has been towed by the Boka Summit and Boka Expedition to a point eight nautical miles from the outer limit of the reef where it will remain until authorities determine the best course of action. Water depth at the site is 2,000 meters.

The stern section has remained aground on the reef while salvors await improved weather conditions to remove the remaining small amount of residual oil in the engine room. It is estimated around 30 cubic meters of lubricating oil and residues remain onboard of the stern section.

Meanwhile, response teams continue to clean the spill from mangroves, beaches and wetlands after most of the oil at sea had been collected. France, Japan and India have dispatched personnel to assist in the salvage and cleanup efforts.

Wakashio is owned by Japan’s Nagashiki Shipping and chartered by Mitsui OSK Lines.

On Tuesday, Mauritius arrested the vessel's captain and chief officer. Both were charged with endangering safe navigation and are being held without bail.

Nagashiki Shipping said in a statement it will continue to support the crew and their families while awaiting future judicial decisions.

The shipowner also apologized for "causing a great deal of inconvenience to everyone in Mauritius and all other parties involved, due to the grounding and resulting oil spill".