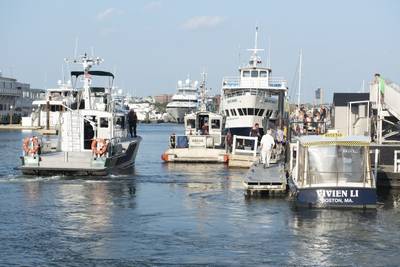 A Coast Guard Station Boston 45-foot response boat crew stands by at Long Wharf in Boston, Thursday, August 16 after responding to a collision between a water taxi and sailboat in Boston Harbor. (U.S. Coast Guard photo by Andrew Barresi)

A water taxi collided with a sailboat on a mooring ball Thursday afternoon near Long Wharf in Boston Harbor.

Only one minor injury was reported, and the patient was treated and released at the scene.

A U.S. Coast Guard Station Boston rescue crew along with the Boston Fire Department, Boston Police Department, and Massachusetts Environmental Police all responded to the scene at around 5 p.m.

The water taxi had one operator and seven passengers. One passenger sustained a minor injury to his nose and was treated at the scene. The sailboat had three people on board, none of which were injured.

The cause of the accident is under investigation.

Cambodia has agreed to allow a cruise ship, that has been turned away by five countries over fears that someone aboard may have the coronavirus…