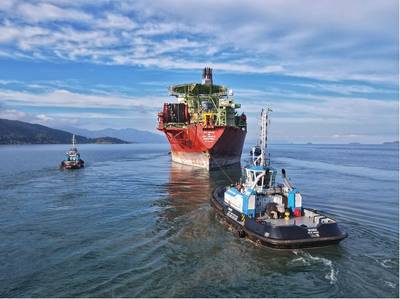 Eying recent demand increases and oil prices recovery in the international market, Brazil's largest tug operator says it is ramping up to support a growing number of offshore oil and gas projects expected to take off in the coming years.

Globally, around 30 production floater contracts are now queued up for award over the next 18 months, assuming no major market disruption occurs and the supply chain can absorb the orders within this time frame, according to an in-depth market analysis recently completed by International Maritime Associates/World Energy Reports.

Wilson Sons, which operates a fleet of 80 tugs--the largest on the Brazilian coast--has this year participated this year in more than 20 operations for the oil and gas market, and the company said it expects 22 floating production storage and offloading units (FPSO) to begin operations in the country between 2022 and 2026, injecting renewed optimism into the local maritime support market.

"Over the next four years, we will have a considerable number of platforms starting to operate, others being decommissioned, new LNG terminals, which brings a series of opportunities for the supply chain in this industry," said Elísio Dourado, commercial director of Wilson Sons' Towage division.

Already, 93% of Wilson Sons' tugs have azimuth propulsion (ASD) and four are escort tugs, a necessary feature for moving large structures such as oil platforms. The company announced this year that it has started building a series of six additional high-powered tugs at its shipyard in Guarujá.

In recent years, Wilson Sons has been operating in platform support maneuvers, operations in liquefied natural gas (LNG) terminals and ship-to-ship operations. Among the projects served by the company are the LNG terminals of Celse (Aracajú - SE), GNA (Açu Port - RJ) and Petrobras (Pecém - CE), in addition to the ship-to-ship operations at Açu Port and participation in assistance maneuvers for the FPSOs P-71 at Shipyard Jurong (ES), BW Cidade de São Vicente (RJ), FPSO Carioca MV30 (RJ), among others.

"We have experienced consistent growth in this market, which we are looking closely at. These are complex operations that demand great care with safety and intense training of the crew. And safety is, without a doubt, one of the main pillars of the Wilson Sons’ Group," Dourado said.

"When there is an O&G (oil and gas) operation, the operational team participates in meetings with customers from the beginning to ensure the best planning for the maneuver, as the tugboats are an essential part of the process. Towing, docking/undocking and operating plans are usually approved by us and we normally suggest the best arrangements of connections, cables and materials to be used. This alignment of the Wilson Sons’ team with the customer is essential for the maneuver to take place safely and efficiently," the commercial director added.