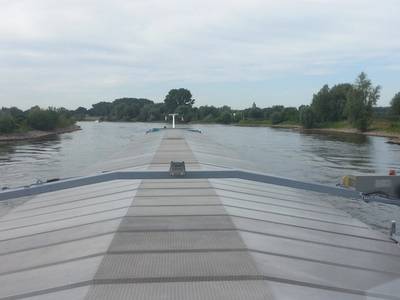 BMT ARGOSS, (BMT) a subsidiary of BMT Group Ltd, has secured a new contract with Dutch-based engineering consultancy, Witteveen+Bos (W+B), to provide specialist knowledge for the new ‘stay overnight’ harbour near Giesbeek, along the IJssel branch of the river Rhine.
The new harbour is part of Rijkswaterstaat’s (the Ministry of Infrastructure and the Environment) aim to develop a number of similar resting facilities for inland vessel crews on the river Rhine, the most important inland waterway in Western Europe. BMT will work closely with W+B to provide unparalleled visual simulation of the proposed new infrastructure through its real-time simulation and training bridge, REMBRANDT-INLAND.
Jacqueline Bulsink at Witteveen + Bos comments: “Having previously worked with BMT on similar projects, we were confident that the team could make a valuable contribution to the harbour design process by providing real-time manoeuvring simulations.”
Developed to support the specialized control systems and navigation charts used by vessels working on inland waterways, the portable REMBRANDT-INLAND bridge simulator is a highly accurate, capable and flexible alternative to Full Mission Bridge (FMB) marine simulators, delivering equivalent functionality at a lower price point.
The REMBRANDT system has a wide range of high-fidelity ship models which can interact with varying environmental conditions (current, wind and waves), geometry (shallow water and bank effects), as well as other vessels and tugs to produce realistic vessel behaviour.
Hans Veldman, Senior Project Manager at BMT ARGOSS explains: “We recognize that the safe and swift arrival to and departure from the harbour is vital. Our portable manoeuvring simulator, REMBRANDT-INLAND, which can be used by pilots, skippers, ship operators, naval architects and harbour authorities, allows us to test the nautical safety and swiftness, including the speed of access for the proposed harbour layout. As such, these simulations become an integral part in assessing the harbour design and ensuring it is fit for purpose.”
BMT ARGOSS has also recently provided similar simulations as part of the public consultation into the proposed harbour developments at Spijk and Tuindorp along the river Rhine. Parts of these simulations have been successfully performed in the town hall in Lobith in the presence of local public.